Here's the cover for an issue of Banned in Britain that I never published. Cool cover, lazy editor. LOL. The film on the cover is the Indonesian MAKHLUK DARI KUBUR. 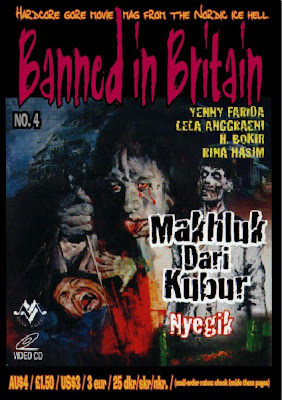 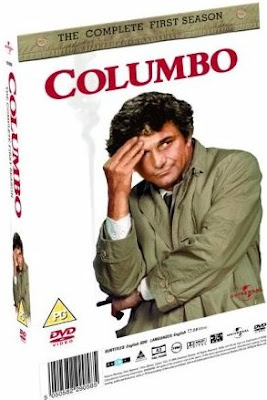 I looked down and discovered my white T-shirt was full of blood. Not fake blood or tomato juice but real living human blood. All over my shirt. I was around 7 or 8 years old and I was sitting in bed watching an episode of Columbo and I got the biggest nosebleed ever!! (and lets not go into why I had a nosebleed! Picking your nose is a filthy habit but, hey, I was 7 yrs old for crying out loud!! LOL).

I haven't really watched Columbo since its original run back in the 70s and I have never watched a full episode of the "new" seasons (i.e. counting from season 8) so when I stumbled over a particularly cheap Columbo box at a local store I thought it was finally time for a re-visit. :-)

So far I've watched two episodes and I can certainly see why we followed the series religiously in my family in the 70s. It's pretty cool. Well, not "cool" like Fonzie but you know wha' ah mean.

The box I got contains the complete season 1 and also includes the two feature length pilots that were made prior to the series. There's no other extras.

When I watched the first episode (directed by Steven Spielberg no less!) I couldn't help thinking there was something that didn't quite sit well with me; Then I discovered the cause: it was in colour!!! The show was filmed in colour alright but we never WATCHED it in colour cos in my family we didn't get a colour TV until (I think) around 1980!! So obviously I switched off the colours and watched the rest in black & white. :-) :-) :-)
Posted by Jack J at 12:18 AM 8 comments: