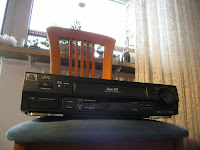 I remember a time... [said in a voice like the old narrator at the beginning of MAD MAX]... when you could actually buy a new video recorder at any radio shop or supermarket you walked into. No so anymore. Men began to fight over the oil... Ahm, okay, maybe not but if you're lucky to find a store that actually has new video players they're most likely DVD/VHS combos at big chain stores (and I wouldn't touch combos with a ten foot pole), or cheapo shit players at small stores that have been gathering dust for years (the players, not the stores). And that's a huge problem when you're an ex-rental video tape collector and your old player is dying on you. And, well, my old trusted Panasonic VCR is beginning to act funny.

I've been wanting a JVC player for a while because apparently they're supposed to be the top of the crop. I'm sure I read somewhere that the last model which JVC made is the best VCR that ever came out. Unfortunately, this is common knowledge to other video collectors as well so finding a player in a good condition is either very time consuming or quite expensive - or most likely both! Today, I finally won a JVC player on German eBay! Whoo-hoo!! It's not the last model but it's close enough.

German eBay is good cos you can still get VCR players at reasonable prices and in contradiction to many other countries the German postal service aren't fucking their customers in the ass by raising postage fees to insane hight. Getting a heavy VCR from Germany isn't gonna double the price as it would from some other certain Eurotrash countries. The VCR that I just won is gonna cost me a mere 22 Euros to ship from to Denmark. That is very, very CHEAP!! It's about the same price as two video tapes are to send from Sweden to Denmark!!! There were other bidders but the final bid from someone else was for 82 Euros (i.e. my winning bid is €83). I had placed 130 Euros on the player. Now I just need a Pioneer DVD recorder and I'll be alright for a while again.

Hmmm, altho I could also do with a new Betamax player. o_O
Posted by Jack J at 3:07 PM No comments: