So I'm doing this job-centre financed course at the moment and every day I come home and I'm just BEAT. Completely knackered! (maybe if I slept more that four hrs a night it'd help matters but what can you do, this is how it's always been). Anyhoo, so today I come home, decide to gulp down a yoghurt before hitting the showers, I turn on the telly and this movie is just starting and before I know it I've "wasted" 90 minutes on a tragic, romantic flick about some psychically unstable young guy and his Jewish parents, the pill popping chick he's in love with, and somewhere there's another chick as well. And in the middle of it all the creepy guy from David Cronenberg's CRASH turns up. The film was on ARTE TV so needless to say I sat thru it all with German dubbing. Good film.
Posted by Jack J at 10:41 PM No comments:

In a category of its own 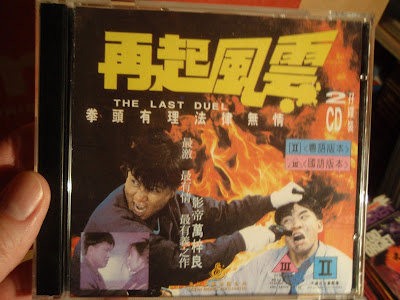 Can someone please explain this? The VCD for the HK film THE LAST DUEL (Tommy Fan, 1989) has not one but two ratings on the cover! The film is apparently rated both CATEGORY II and CATEGORY III. How is that possible. Wouldn't the CAT III rating render the CAT II rating void? In accordance with standard procedure the rating notification slip from the HK rating board is printed on the back of the VCD but like with the two ratings there are also two rating slips. Unfortunately, they've been squeezed down to a size too small to read.

I checked the film on the HKMDB and they list it with both ratings as well. One explanation could have been that the different ratings were for different territories - but seeing as the HK Category rating is strictly for Hong Kong I don't see how that would be possible.

It was common for a foul language to be cut (silenced) or bleeped by censors in HK. It's very rare you will actually hear an "F" word on a Canto soundtrack to a HK film. Funny, cos it's easy to hear them on the streets.

I'm quite a fan of this film.
It's worth noting that "The Last Duel" received censor cuts for violence. I remember the old Ocean Shores rental tape! This VCD however, has all the violence, blood and gunshots.

The original film that Joseph Lai cannibalised for his INFERNO THUNDERBOLT 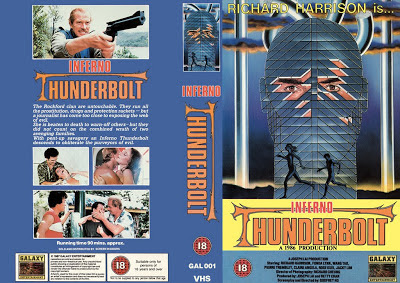 Thanks to JESUS MANUEL of the way cool blog Golden Ninja Warrior Chronicles I learnt which film was the source film that Joseph Lai and his IFD label in Hong Kong used for their cut & paste film INFERNO THUNDERBOLT. The film is the Taiwanese THE ANGER and after having had it on eBay auto search for quite a while I finally struck gold a few days ago when the Ocean Shores VCD release of the film popped up. And tonight the auction ended with only one winner! LOL (altho the winning bid makes me feel like I pulled the short straw at the same time! Argh!). Check Jesus Manuel's post about the film here and see screen grabs. 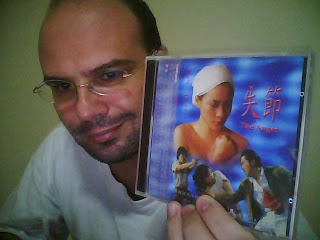 No, that's not me but JESUS MANUEL of GOLDEN NINJA WARRIOR CHRONICLES blog!