I've just finished watching STAKE LAND for the fifth time since I bought it on DVD in 2011! It's such an amazing film. I'll even use the word "wonderful" which is a term one can use much too seldom about new cinema. But STAKE LAND is a truly wonderful movie. The tone of the film is extraordinarily brilliant the whole way thru. There aren't that many movies that I've watched five times over a period of a year and a half!

STAKE LAND is a vampire movie but most teenagers who're weaned on good looking romantic vampires are going to get pretty disappointed with this movie. The vampires are NASTY and their clothes and faces are dirty with dried-up and caked old blood. And the same goes for the main characters. The story is basically two men's journey thru an America that doesn't exist any longer. A land that is no longer a country. Religious fanatics, crooks, cannibals (rumoured but not actually seen), and what else you'd expect in a territory with no law - it's all there. Oh, and vampires too. 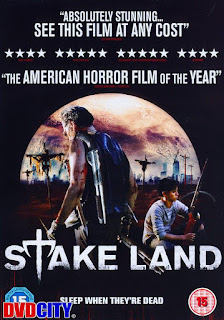 STAKE LAND is definitely one of the best horror films I've seen the last couple of years. And the music is perfect for setting the tone. A tone of detachment and not belonging (two words that basically means the same to coin an old Damon Foster phrase from "Oriental Cinema"). Fortunately, there was no retarded producer who somehow felt it would be a grand idea to add a hip-hop track. Not even over the end-credits. Yay! Thanks. I usually never buy soundtrack CD's but this one I had to own! My DVD version is a reg. 1 2-disc release. Disc #2 has heaps of extras, obviously, but I'm not sure you need half of it. There are a bunch of "what happened to the characters prior to the storyline of the film" type videos and quite frankly, shit like that annoys me. They're almost "fan videos" or has the feel of paperbacks in the old days that were churned out to cash in on TV series like Star Trek or McCloud.

There are two commentary tracks, both feature the director and both have a ton of other people jabbering on about the film (sigh). I'll happily listen to an audio track by a director but when everybody from the guy who made coffee on the set to whoever made sure they had loo paper (I'm exaggerating to make a point here) I kinda lose interest. But forget about that shit, the film is what you definitely should watch if you haven't already.

STAKE LAND is highly recommended. And while you're at it you'll need to order another marvellous "the United States has ceased to exist and two guys try to make it thru the land to get to some other place" kind of film; THE ROAD (which I reviewed here). There aren't any vampires but it's every bit as awesome as STAKE LAND.