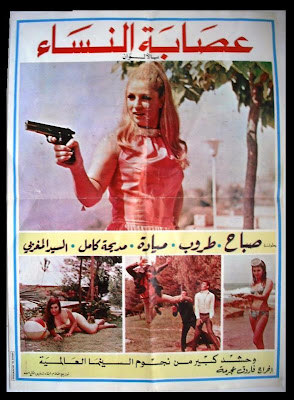 I know nothing about Frank Agrama (aka Farouk Ajrama aka Seyfettin Tiryaki) other than he directed DAWN OF THE MUMMY which I've seen. But I stumbled over the above poster at an Lebanese eBay store and thought I'd better check out if there were any DVD releases of the film. I didn't find a DVD but what I did find was a pile of posts about this director and his films, all posted by one fanatical film fan ("Doctor Kiss") on the Classic Horror Film Board (of which I'm not a member).

If you've seen DAWN you might think, "meh" but check out this YouTube collection of clips from Agrama's 1960s films were apparently were much better, or at least more fresh/energetic/youthful (and one of the posts provided a link to a DVD so that was cool. Unfortunately it seems it's un-subbed). And do check out the original posts on the Classic Horror Film Board here.


Kudos to Doctor Kiss for the thorough and detailed work he's provided in that thread.
Posted by Jack J at 10:10 AM 23 comments: