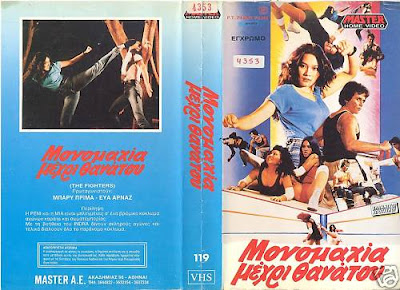 Here's the Greek cover for the highly entertaining Indo movie THE FIGHTERS directed by Jopi Burnama (who also did RAMBU aka The Intruder) and starring Eva Arnaz and Barry Prima. The retards at Troma re-dubbed the film and made it into a "funny" comedy (I fail to see the comedy) and cut a big chunk out of it as well. This version came out on VHS. It was later re-released on a DVD which includes both versions. The cover of the Greek VHS shown here is of a superior video version that not only carries the original Indonesian English title, The Fighters, but which is also letterboxed. It was on eBay last night and someone (a member of Cinehound, LOL) won it for the insane price of just over $200. I made what I believed was quite a bid but obviously it wasn't enough. :( 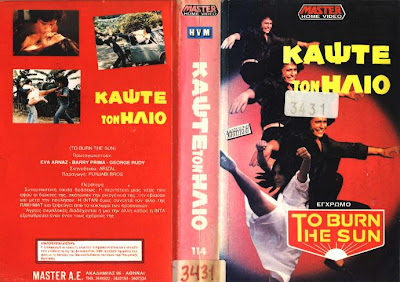 The zombies at Troma also released a sequel, Ferocious Female Freedom Fighters 2, but needless to say this is yet another re-titling, this time of a film directed by Arizal (Stabilizer, Lethal Hunter, and many more) called TO BURN THE SUN. This film was actually made the year before THE FIGHTERS. It does however star Eva Arnaz and Barry Prima (and it's highly entertaining!). Fortunately, Troma left the original English dubbing as it were on the original export version. It's out on a fullscreen VHS (no DVD though). I also have the Malay VCD in my collection and from memory I'm pretty sure the Troma tape is uncut. However, the version to watch comes yet again from our friends in Greece where it's out on a letterboxed VHS. Unfortunately, I don't have that one eiher. Boo-hoo. :(

TO BURN THE SUN review from Trash-online:

More Indonesian insanity in this ultra-rare film by Arizal. Indan (Eva Arnaz) is captured by the killers of her father and is forced in a life of decadence and prostitution. Her fiancé manages to track her down and takes her with him. Her grandfather teaches her martial arts. The time comes when she is capable enough to face her tormentors... This is a truly bizarre creation which has a little bit of everything: over the top action, martial arts, melodrama, rape & killings, snake attacks, atrocious Indonesian disco, synthesizer and even country (!) music numbers and even a couple of gory bits. Plus the disastrous dubbing work that is expected from these films! It just has to be seen to be believed! From the maker of FINAL SCORE and LETHAL HUNTER! We carry a nice & clear, uncut and widescreen print. Probably the most bizarre female revenge movie ever made.

And welcome to Gary B (another dvdManiac I believe) who's now also one of my disciples. That's a cool blog ya got there, Gary. :D
Posted by Jack J at 5:31 AM No comments:

I'm looking for info on a Filipino flick entitled MGA REYNA NG KAGUBATAN over on one of my other 1001 blogs. If you have any info on this rare film please let me know. Thanks.
Go here.
Posted by Jack J at 5:21 AM 2 comments: