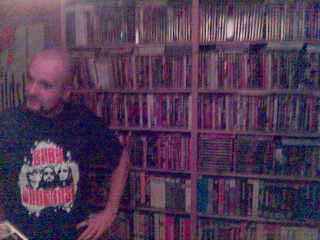 More crappy cell phone pictures from the past; This time it's Nils Markvardsen, editor of eXtase magazine, stoner/doom promoter and Denmark's spaghetti western aficionado #1 with a collection to boot!

In this photo Nils is standing in front of his DVD collection which soon will probably get ruined by little people and spat on and God knows what. Yes, Nils is becoming a daddy. Well, congrats Nils (I guess, haha).
Posted by Jack J at 4:29 PM 4 comments: 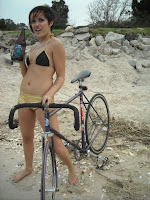 I finally got a text message from AWE head honcho Jan Schmidt yesterday as a response to my inquiry about what's going on with their site, and why it's gone from Cyberspace. Jan replied they're sick of the website and from now on you have to send them an old fashioned letter (remember those ones?) if you wanna get in contact with them. I assume it's a joke.

Still, no website or blog online tho. Nor an answer from Mr. Eriksen. Oh well. Just good to hear they're at least not closing down despite their alternative way of running the company. Haha.


Ps: The bicycle chick has obviously noting to do with this post but is just there to liven up an otherwise dull entry. The piccie is clickable for bigger size too!
Posted by Jack J at 1:40 PM 2 comments: 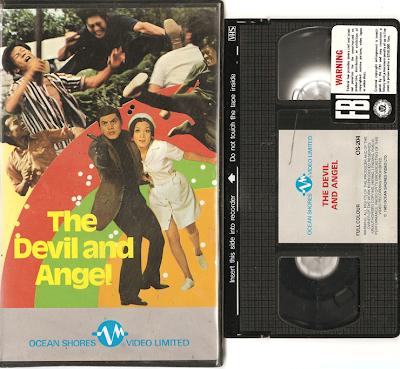 I got the two tapes from different sellers and it's fun how you never know what to expect when you buy something (fairly) blindly. One tape (Devil) was released in 1984 but the guy I bought it from might as well have bought it last week; That's how good it looks! Absolutely near mint condition. The other tape (Flash) was also released in '84 and obviously comes from a rental outlet and it certainly looks like it! 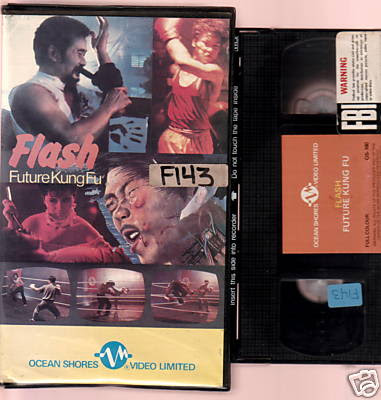 The inner see-thru plastic is cracked and some of it is coming off. The (probably) nicotine filled air in the store has made the same see-thru plastic completely yellow. And the outside box is totally sticky because it's so dirty from (I assume) hundreds or even thousands of hands that have touched it throughout the years. You wanna wash your hands after having touched it, haha. Buy hey, don't get me wrong, I'm really happy to have got both tapes! All the latter needs is a good scrub, LOL.
Posted by Jack J at 1:05 PM 2 comments: