Nicking a review isn't a very nice thing to do but I'm gonna do it anyway cos this write-up is great fun! Over to you, Michael:

By Michael Weldon
This almost surreal little film is remarkable for three reasons: it's in color, it's narrated by a woman's corpse, and it's the closest thing to a horror movie released in the lean year of 1947. Bela Lugosi (in a crooked, wide-brimmed hat and a Colonel Sanders tie) acts like he's in a trance. He lurks around peering in windows with dwarf pal Angelo Rossitto. Angelo, who was in two other Lugosi movies, also appeared in Freaks and played an alien in Galaxina. With villain George Zucco, idiot Nat Pendleton, one-time star Joyce Compton, and Douglas Fowley (who later directed Macumba Love). It's only 65 minutes long. Watch it closely and decide: Had the actors ever seen the script? Were some of them under the influence of a very disorienting drug? Fascinating in a different way from Bela's Ed Wood films.

- Michael Weldon, from "The Psychotronic Encyclopedia of Film" (1983)

I watched the film tonight and I wholeheartedly agree with Weldon; Almost surreal! But despite the qualities of whatever film Bela Lugosi was in he always gave his fullest! And I must say 1947 really WAS a lean year!! The year isn't even listed in "The Encyclopaedia of Horror Movies" book!!! O_O

There are 20 different public domain versions of this film out there. If you wanna purchase a copy I recommend you either get the reg. 1 DVD from Miracle or the reg. 2 DVD from Network. Someone who collects Lugosi films told me these two releases are head and shoulders better than the rest of the PD drek out there. I've got the Network DVD and can confirm it's of decent quality. There's no extras other than the trailer.
Posted by Jack J at 11:45 PM No comments:

I re-watched the weirdo horror movie THE VELVET VAMPIRE yesterday on the new reg. 1 DVD from SHOUT! Factory! I own an old rare VHS but it was awesome to finally be able to watch the film in widescreen and with perfect colours. The print used for the DVD had a slightly crackling soundtrack in places but was otherwise very, very good.

Years ago, I remember reading reviews that would flat out dismiss THE VELVET VAMPIRE as a terrible horror movie but, well, if you expect something and it doesn't turn out to be what you expected needless to say you're bound to get disappointed (unless you're an open minded person - which a lot of reviewers just AREN'T! Or weren't in the old days anyway) and I think most reviewers aren't familiar with (or open to) these weirdo horror films and simply didn't get what they expected.

THE VELVET VAMPIRE shouldn't be viewed as an "ordinary" horror movie like a Hammer horror movie etc. In my view the film is rooted firmly in the WEIRDO horror genre, much like LEGACY OF SATAN (which is basically as if David Lynch had popped some baaad acid and made a horror movie, lol). THE VELVET VAMPIRE is awesome! I really DIG it. And the end... I mean THE END!! How weird is that ending!! (i.e. the scene of people with crosses and the vampire).

The film takes place in a present day setting (well, present day when it was made in 1971 anyway) and is the story about a young couple who're invited to visit a female art collector who lives in the desert. She turns out to be a vampire! There are a few other people in the film but it's a quite small cast, and we never really get to know any of them but the three main characters. From a male pig viewpoint I'd like to point out that the woman who plays the vampire, Celeste Yarnall, could give the dead a boner! Mein gott! The other woman (of the couple) is a babe too but nothing in comparison. Ahm, uh yeah, we were talking about... the plot!!

There are surreal scenes of the couple and the vampire making love in the desert and (not least probably due to the film being set in the "hippie era") a loose moral with the couple that might seem odd nowadays (or not). And very refreshingly the film doesn't blindly follow every vampire rule in the book; Just the fact that most of the film is set in broad daylight would make you scratch your head if this were a Hammer style film. Don't watch this movie and expect to be scared, it isn't very scary at all. And it doesn't have to be because like I said it has other great qualities.

There's a bit of blood in the film but no real gore. But it doesn't matter at all, it's just not needed. The filming is great, the sets are great, and the film's short runtime (under 80 min) makes for a very tight viewing without unnecessary filler. I wish more films were shorter. One more detail that makes THE VELVET VAMPIRE interesting is it was directed by a woman. There weren't that many female directors in those days in the horror genre (are there now?) and the fact that she made a fairly erotic movie (it has both male/female and lesbian scenes) makes it all the more interesting. 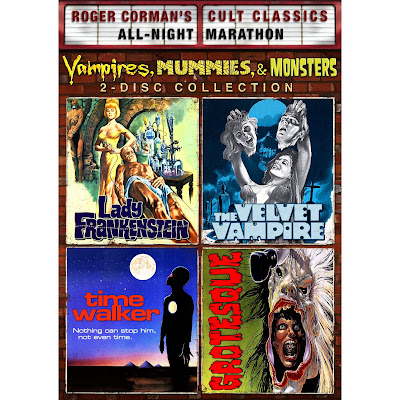 The new DVD is part of SHOUT! Factory's "Roger Corman's Cult Classics All-Night Marathon" series which is praised (and rightfully so) by fans for presenting the old films in fantastic versions! In the extras department there's an old scratched trailer (as much as I love these restored films I also love watching old scratched-beyond-belief grindhouse style trailers!) and a very cool commentary track by Celeste Yarnall. A highly recommended film!

It seems no one has yet posted the trailer to YouTube but I found another one from the early 70s from when the film ran as a double bill with SCREAM OF THE DEMON LOVER (which I sadly haven't seen).
Posted by Jack J at 7:47 PM No comments: