Last night, it had become too late for a real feature length movie but I still wanted to watch something in the field of horror so I pulled out the FEAR ITSELF set (which has been collecting dust on my shelf for about two years or so!!) and decided on BRECK EISNER's SACRIFICE (ultimately because I had read a comment that Fred Adelman made about the CRAZIES remake on his site where he said the film was really good and I figured I might as well give this one a shot then. See, it all hangs together in this universe, LOL). I notice on the box (the Skeleton box mind you!) that it said it was by the same director. It was a no-brainer, if Fred said the remake was really good I didn't need to consider the other episodes. And I'm glad I went with SACRIFICE because, well, it was a great one!

A bunch of crooks are stranded in the middle of a snowy nowhere. Their car is fucked and so is one of the guys who's been shot (or some such. An explanation is given but it's probably bogus). It's never explained what's happened prior to the film's start. They discover some buildings in the distance and start walking there. Thru the snow, thru the hostile (yet beautiful Canadian) landscape. Once they get there they find out it's actually an old fort which is only inhabited by three young women. Well, that is until they find out there's someone else there that the fair maidens aren't telling them about. Then blood, killing, hanging upside down, a bed that isn't very comfy, nasty breath, an ugly mug, and mucho sexy (yet scary) Rachel Miner!

I loved this episode and already wanna watch it again. The approx 45 minute running time means all the fat and unnecessary chewy bits are cut off the bone and we're left with an intense and tight wee horror film. So far I've only watched one other episode from this season (I count it as the third season as it's really the sequel to the MASTERS OF HORROR series that was retitled because it was broadcast by a different network. The complete season is out on DVD in the UK but I decided to get the reg. 1 release as it looks pretty fucken cool. xD
Highly recommended.

PS: I couldn't find a trailer for this specific episode so I've posted the preview trailer for the series. Almost all of the first 30 seconds are from SACRIFICE plus there's some footage towards the end. 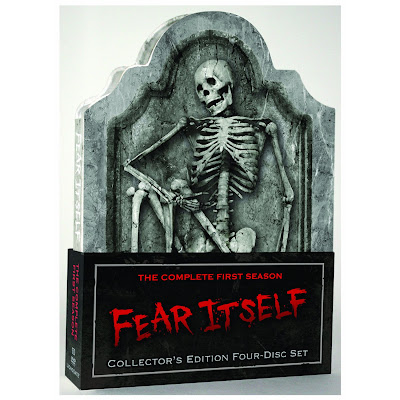 As the second film in my Halloween month series I watched INFESTATION last night and, incidentally, just like the first film, CLOVERFIELD, it was a film about nasty creatures that attack humans. These ones didn't come from outer space but from the dirt we step on. And somehow they got much bigger. It's never explained why or how that happened. The film is part killer bug feature, part comedy but fortunately the comedic part never takes over and the film never becomes a straight-out comedy.

No real gore but lots of blown-to-pieces bugs. Whatshisface from TWIN PEAKS is in there too. Fun flick that I'd watch again. I bought the Danish DVD second hand from Blockbuster. It had ZILCH extras.
Recommended.
Posted by Jack J at 12:59 AM 2 comments: