Ahh, I've lost this one in auctions a few times but tonight was my night! Yes, I'm now the happy owner of the dark and gory over-the-top (and cheesy) Hong Kong horror movie THE DEVIL from 1981, originally entitled XIE MO. The tape is English dubbed and letterboxed. 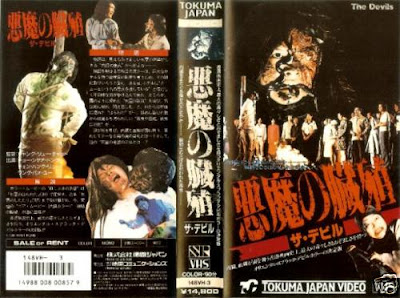 There's also a US VHS release but reportedly that version has the sound out of sync (and is probably fullscreen, altho I don't know that for sure). If you don't wanna wait for another rare Japanese VHS version to turn up on eBay I'll strongly advise you do not buy the US DVD release from Videoasia. Videoasia is a scam company that doesn't care one bit about their "releases" (and I use the term loosely, their releases are bootlegs anyway!). Their DVDs are sourced from video tapes, often really bad quality video tapes, and sometimes the sound is just fucked up beyond comprehension. My Greek VHS release of THE DOG (aka Vengeance Called a Dog) is far superior to their DVD. Imagine that, a Greek tape that's better than a DVD!

I remember one of their DVDs which I bought for a friend had both the Cantonese and Mandarin audio tracks joint together in one!! How the bloody hell are you supposed to enjoy a film with two simultaneous audio tracks running at the same time!!! Their covers are an atrocity too and by the way needless to say they used a wrong title for THE DEVIL on the DVD box and called it Devil's Express (which is a completely different film!). Hahaha. Oh mein gott, the atrocities I see, the horror, the... (rambling again). Get a boot from FarEastFlix instead.

Cover scans of the US VHS: 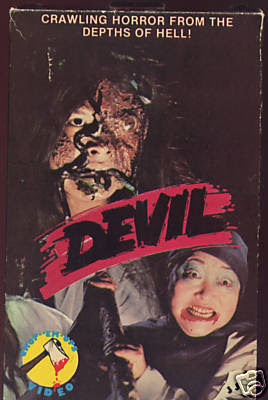 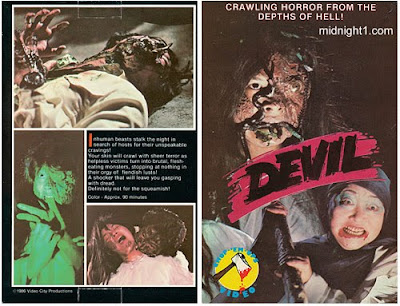 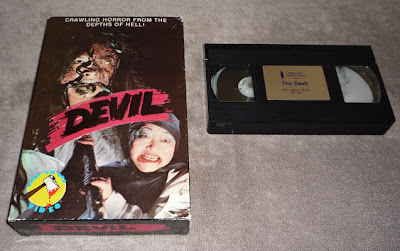 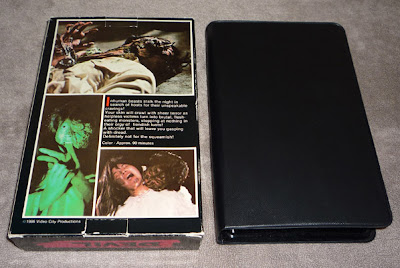 Usually I don't care much for reviews on the bloody IMDb but there were actually a couple fun ones that I'll blatantly steal and post here:

By Woodyanders from The Last New Jersey Drive-In on the Left
An evil, ugly, rot-faced witch casts spells on her victims that turn their insides into bugs and snakes. Meanwhile, a smooth con man named Chao marries into a well-to-do family so he can steal their money. Director Jen Chieh Chang, working from a muddled script by Luk Pak Sang, relates the ridiculously convoluted story at a plodding pace and fails to maintain a steady and even tone (the picture fluctuates wildly from being light and silly one moment to more grim and horrific the next moment!).

Yet despite these flaws, this movie remains strangely compelling thanks to its genuinely oddball plot and offbeat "anything can happen" unpredictable atmosphere. The film really kicks to life with a series of memorably vile and revolting in-your-face graphic and unflinching splatter set pieces: a luckless lady has her face smashed in with a rock at the start of the flick, a man has his stomach cut open so various writing insects can be removed from his abdomen, a possessed guy gets burned at the stake, and a few folks vomit forth plenty of slithery snakes and grody bugs.


by Zerozed
First off, let me say that "The Devil" is the feel good movie of the year! It's a roller-coaster ride of thrills and chills! It's a triumph of Chinese Cinema!

After watching this film, I can honestly say it is probably the finest example of Hong Kong gore. I suspect there's actually no plot to this thing--not that it matters. If you like to see one gratuitous scene after another of people vomiting snakes, worms and maggots, then this film is for you! Oh, there's plenty of erupting boils as well. And a rather fey Chinese boy dressed like the long-lost miniature Asian member of the Village People. His name is (and I'm not making this up) "Ding Dong." Mere words just cannot do this masterpiece justice.

Sell all your worldly possessions and go see this film NOW!!!!!

Lastly, and completely unrelated to THE DEVIL; I scored this tape the other day: THE LAST MATCH directed by Fabrizio De Angelis. I wasn't gonna buy it but I'm sure it'll please Paul Cooke endlessly that I went for it after having read his (or is it David Zuzelo's) review in their book Tough to Kill (why isn't the reviewer listed for each film?). Now, this better deliver the goods, mate! :D 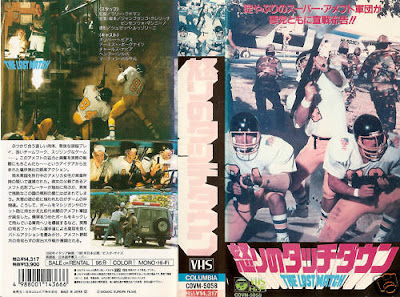 A must see, this is perhaps the ultimate ending to the entire Tough To Kill saga, because no action film made after it in Italy would be nearly as bizarre.

4 Exploding Huts out of 5 possible

I've posted a French trailer for Bruno Mattei's (highly entertaining!) PREDATOR rip-off ROBOWAR before but this Japanese one is much better. Check it out!

Upcoming documentary on the polizisco genre

Wauw, I'm certainly looking forward to this! I don't quite understand why they're referring to the genre as "Eurocrime" when the docu is obviously only about the Italian polizisco (police) films but, hey, I can live with that. A couple of the actors have aged beyond recognition but someone like Fred Williamson is, well, very recognisable! :D
Incidentally I watched Umberto Lenzi's NAPOLI VIOLENTA (aka Violent Naples/Helvedes forgård) the other night. Great stuff indeed!! 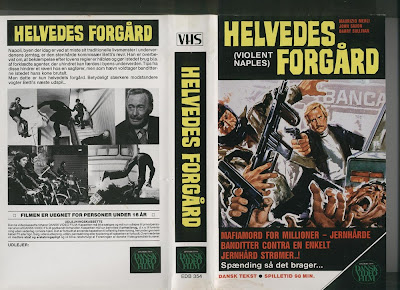