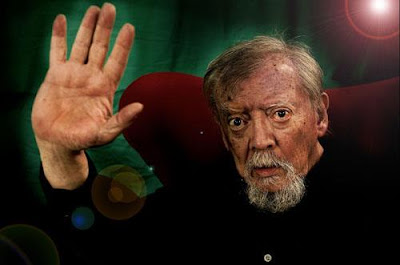 Jess Franco has passed away. Most of this world's genre film blogs will probably have write-ups about it the next couple of days so I won't try and write anything incisive. I've seen far too few of old Franco's films to do so anyway. His muse, Lina Romay, passed away last year. The first of his films that I ever watched is the third (and unofficial) Ilsa sequel, ILSA, THE WICKED WARDEN (aka Greta, Haus ohne Männer / Ilse, Slageren fra junglefængslet). Incidentally, both Lina and Jess are in that film. I wanted to post the trailer for WICKED WARDEN but the only one I could find looks like a fake one - but, hey, maybe that's not such a bad idea - many of his films were hacked up on video anyway. And some where apparently hack jobs. I'm also posting a short interview that Jess did recently about Emilio Schargorodsky's new film DRACULA 0.9 (Schargorodsky also did the interview with Jess). For a proper piece on Jess Franco's passing check out my buddy Jason's article here. RIP, Mr Franco.