A Bava double bill to remember - a quarter of a century ago! 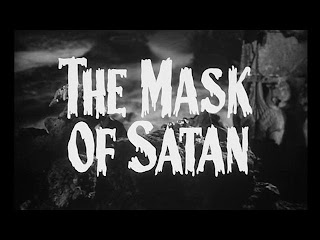 I used to live in the UK in the late 80s/early 90s. Actually, my love of horror films began in the UK, and in early 1990 I went to visit my friend Suzanne Edmonds in London. I'm not sure if I already knew about what was going to be screened on TV that night or if I found out during the visit. I probably knew already, but then again maybe I just brought a blank tape by chance. Or maybe my friend Suzanne had one that she gave me. Who knows. And it's not all that important - what is of much, much, much greater importance is what was on BBC2 that night! A double bill of Mario Bava's THE MASK OF SATAN and LISA AND THE DEVIL! It was introduced by Kim Newman and yours truly was ready at my friend's VCR and said blank tape. And... I just found my old tape!

Needless to say, better versions of the two films are available on DVD and blu-ray now but that broadcast was historical as it was: 1) the very first time THE MASK OF SATAN was screened in its uncut original version in the UK (i.e. not neither the re-edited and re-dubbed American fiasco, nor the British censored version of the American edit). And 2) it was the first time the director's cut of LISA was shown in the UK. The screen grab is not from my tape but one I found online.

Tonight I've uploaded Kim Newman's intros to the two films, and I've watched them a handful of times now. So weird, it's so fresh in my memory and yet... that double bill was 24 years ago!


PS: the title-card screen-grab from THE MASK OF SATAN isn't from my tape but one I found online.
Posted by Jack J at 7:58 PM 2 comments: