Two weeks ago I talked about having bought SCANNER COP 2 and now I've finally got hold of the first film, not surprisingly entitled SCANNER COP. It's not actually the real first film as it's a (kinda) sequel to the first three SCANNERS films. Anyhoo, remember how I said SCANNER COP 2 was great? Well, this one was even better! Resonator (aka Chris Ho) of Cinehound forum told me they were better than the real SCANNERS sequels and I can only agree on that. Both SCANNER COP 1 and 2 are full of action and gory violence and mayhem and shit. There's no head explosion in SCANNER COP but I'm sure you'll survive this one entry without. LOL. I bought the Danish DVD which has absolutely no extras that are connected to the film itself. There are a handful of trailers for other films - and that's it! The Danish subtitles are fucked up as they're totally out of sync (the other Scandinavian subs are fine). Fullscreen picture. Highly recommended.

Check this awesome cover for the French DVD release: 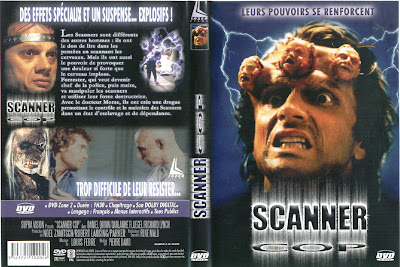