112 times horror and a nude woman dancing in the Devil's flames. Whoo-hoo!!! 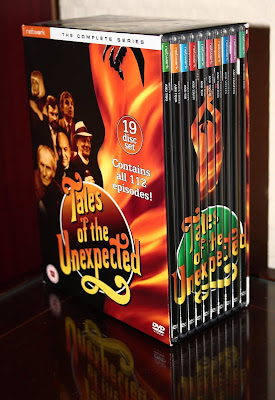 I received the complete "Tales of the Unexpected" DVD box set today. The show ran for 9 years on TV in the UK and was based on horror/thriller stories by Roald Dahl. A friend gave me an early box of selected episodes years ago but this is the complete thing. The other set also cut off the intro's if I remember correctly.

I watched the early seasons on local TV in the early 80s and remember them fondly. If you don't remember the show it's the one that starts with a nude woman dancing in flames and every episode had an intro by Roald Dahl.

The box is usually expensive but I've been sitting out here in the dark waiting for a cheap(ish) one to turn up on eBay. And last week it did. Muhahaha. 19 discs, 112 episodes.

I can't figure out if I think it's a good thing THE NEW YORK DOLLS exist again or not. I mean almost 40 years on and only David Johansen and whatshisface are left and their new material is pretty MELLOW ... but then again this fan recording of Vietnamese Baby is fucken great. The camera is all over the place, the sound goes murky, you hear the camera guy singing along, haha. This is more than crude filming but pretty great in my book. xD xD xD
Posted by Jack J at 7:33 PM No comments: