Bruno Mattei is back from the dead!!! 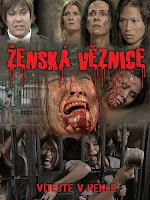 Alright, no he hasn't returned as one of his crappy zombies from ZOMBI 3 or HELL OF THE LIVING DEAD (now THAT would have been quite something!!) but his JAIL: A WOMAN'S HELL (2006) has finally been released on DVD!!! Oh sing thee joyous wee ones oh sing thy hymens of praise. A couple of years back we waited patiently for the release of this last two cannibal movies, LAND OF DEATH + CANNIBAL WORLD, and then we waited patiently for his last two zombie films, ISLAND OF THE LIVING DEAD and ZOMBIES: THE BEGINNING ...when they finally came out on DVD it was in obscure places like Russia, Japan and the Czech Republic... and now, finally, JAIL has been granted a DVD release in the same obscure place that first released his last zombie flicks, i.e. jolly Republic of all things Czech!!! Yay! Spiffy!! Check out this trailer for the DVD:

And go HERE for the real trailer (unfortunately I can't embed it here!). Now the question is just where to get it from! I did manage to order ISLAND OF DEATH, ZOMBIES: THE BEGINNING and Joe D'amato's DEEP BLOOD (not on DVD anywhere else) from a Czech store but, mein gott, it takes time!!!

PS: I wasn't quite sure where to post this as JAIL (like Mattei's other last films) was indeed filmed in the Philippines and I might as well have posted this on my Filipino blog (and YES that is Mike Monty in the trailer) but since this is more trash than trashy Filipino war I put it here, haha.
Posted by Jack J at 5:06 PM 5 comments: