Ahh, the children of the night... they listen to me...

Okay, maybe that's not quite what ol'e Bela said but anyhow so happy to see people actually read my crappy posts and not least when that "someone" is Todd over at one of my favourite worldweird blogs, Die, Danger, Die, Die, Kill! xD xD xD
Check his new post about THE SISTERHOOD which I wrote about the other day (and I haven't even bloody seen it yet!!! hahaha).
Posted by Jack J at 2:25 PM No comments:

Another Woman Hunt for the bedpost 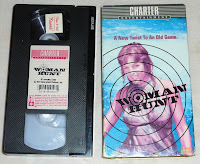 I wrote about Eddie Romero's Filipino movie THE WOMAN HUNT the other day. The film was slated for release from SHOUT! FACTORY but now it seems it may never get released from them. So like so often before we have to rely on old video tape releases. As I mentioned in the previous post, I already have the UK and Danish tapes but none of them present the film in a particular decent quality. The UK print looks washed out and the Danish video is simply too dark. I looked around for other versions and found the US NTSC tape on eBay. Unfortunately, these tapes aren't exactly popping up everywhere so I had to fight off other fans to get it (i.e. it wasn't all that cheap), LOL. But anyway it's mine now! I'll post info on the picture quality when I get the tape.


EDIT: I've received the NTSC tape now and watched it right away; And I'm happy to report that the picture quality is quite a bit better than the UK and Danish video tapes! In contradiction to the UK tape the picture is crisp clear and in contradiction to the Danish tape you can actually see what's going on during the night scenes! I still hope SHOUT! FACTURY are going to release the film on DVD but until that happens the US tape is so far the best option there is.
Posted by Jack J at 2:10 PM No comments: