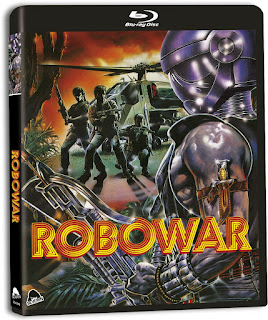 Street date June 25. There's various different versions (and prices). Go here for the stand-alone blu-ray. There's a dvd release as well (but get the blu-ray, cabron!). John Dulaney posted about the release on one of my old posts about the film (from 2010!). John was in the film and in 2011 he posted links to behind the scenes videos that he and Catherine Hickland did. Incidentally, those very same videos are now being included on the blu-ray. You saw them here first! (I just had to say that, haha). This is certainly an old dream come true. Thanks, Severin! (please put out heaps more Mattei stuff).

WE'RE ALL USED TO THE OLD SUBTITLED TRAILER FROM JAPANESE VHS SO HERE'S THE NEW ONE FROM SEVERIN:


A year before their jaw-dropper SHOCKING DARK, director Bruno Mattei (VIOLENCE IN A WOMEN’S PRISON) and co-writers Claudio Fragasso & Rossella Drudi (NIGHT KILLER, ZOMBIE 4) first collaborated on this brain-melting mash-up of PREDATOR, ROBOCOP and Philippines war movie mayhem: When a team of badass commandos is hired for a jungle rescue mission, they’ll instead find them hunted by a kill-crazed creature that is part man, part machine and all glorious ‘80s ItaloSleaze. Reb Brown (UNCOMMON VALOR), Catherine Hickland (ONE LIFE TO LIVE), Massimo Vanni (RATS: NIGHT OF TERROR) and Jim Gaines (ISLAND OF THE LIVING DEAD) star in this “freaking awesome must-watch for any action fan” (BMovieCitadel.com), now scanned in 4k from the original negative and loaded with all-new Special Features.