SHOUT! Factory's cover for their next FILIPINO TRIPLE is here! 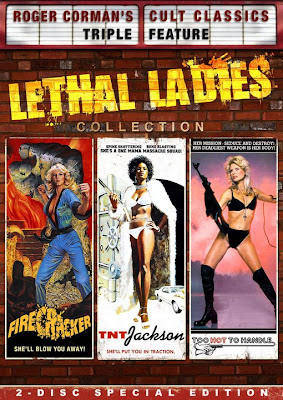 FIRECRACKER (aka Naked Fist, 1981), TNT JACKSON (1974) and TOO HOT TO HANDLE (1977), all made in the Philippines. I'm looking forward to this release A LOT as FIRECRACKER and TNT JACKSON are highly entertaining and FIRECRACKER has never been released on DVD before (TNT has an awful public domain DVD which come out short when you compare it to my old Danish VHS!!). I've got them all on VHS but needless to say (with Shout Factory's rep. for using fabulous prints) this release is bound to smoke my old tapes!

FIRECRACKER is Cirio H. Santiago's remake of his own TNT JACKSON, and he even remade the damn film AGAIN in 1992 as ANGELFIST. It would have been fun if SHOUT! Factory had chosen to include all three versions and put TOO HOT TO HANDLE on another release (ANGELFIST, however, is available on fairly good DVD from New Horizons). Two more US-Filipino films are slated for release from SHOUT!: SAVAGE! (1973) and FLY ME (1973)
Posted by Jack J at 4:02 PM 3 comments: