The Big Boss - original, rejected dub has finally been made public! 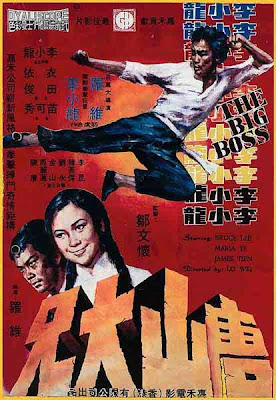 In the past, I've written about the possibility of this ever happening and now it's indeed reality!! Someone in the UK owns a mega rare 35mm print of the original English dubbed version of Bruce Lee's THE BIG BOSS and they've put it up for purchase. Not as a hardcopy but only as download.

Like I've said before, I'm not particularly interested in English dubbed versions of Hong Kong films but with this one it's a different matter. The background makes it interesting! After the original Mandarin language print was made, an English dubbed print was made for export and distributed to certain Middle Eastern territories. When Bruce Lee watched this version he completely hated the dub, and when the film was bought for American distribution the Americans (I assume) thought the dub was too crappy and had a new one made.

This new dub is the one that was distributed to the rest of the world. The original English dubbed version quickly disappeared and was never released to any home-cinema format. A few years ago VideoAsia in the US (yes, the bootleg company VideoAsia!!) announced they were going to release this rare version on DVD but it never happened! It's widely believed by fans that "someone" "asked" the company not to release it. Well, anyway, it seems it's finally here!

I've got confirmation from a fan that the uploaded version is real and not bogus (he's got a copy!) and it's finally out now. Unfortunately, con-artists who claim to have lost/rare prints in the Kung Fu community isn't an unknown phenomenon! I must admit I had my doubts as to this ever being released (altho, of course, it's not a real release but you know what I mean).

Now we just need someone to dig out THE BIG BOSS, PART 2 (the Lo Lieh film) from the realm of lost Hong Kong films, and not to mention the fully uncut Mandarin print of THE BIG BOSS (including the mystical saw-in-head scene!). How awesome would that be!!!

The original trailer with the rejected dub: