One movie genre that is overlooked by EVERYONE is TRASHY VIETNAM WAR MOVIES FROM THE PHILIPPINES (I know, I know, The Philippines never took part in the Vietnam War but just nod your head and look as if you understand).
And before you dismiss these movies just hear me out: Filipino war movies are nothing like old, boring American war movies. Or old, boring Italian war movies, or any other old, boring war movies for that matter were you see endless scenes of convoys driving slowly thru the countryside, officers holding endless boring meetings on how to infiltrate German lines, or boring battle scenes.
If there's ONE thing Filipino war flicks are NOT it's boring! There's just so much action, carnage, mayhem, death, and violence that they rival any HK action film for the sheer amount of everything I just mentioned!!!

There are a few things that are standard to genre; They were made in the 80s or very early 90s. Most of them are totally no-holds-barred. They are nowhere to be found on DVD (legit DVD that is) and they were mostly (often only) released on VHS in Japan and Greece.

And one more thing that links these films together: They star several actors from a group of Westerners who stayed in the Philippines in the 80s. Some of these actors also starred in wild movies from Indonesia and some of them weren't even really actors but just happened to be at the right place at the right time when some Filipino film producer needed westerners for a film with "Americans" in it. Some of the actors were actually real actors who had starred in cheap movies in Italy and some (very few) had even been in American movies. The genre died out in the early 90s but some of these actors stayed on and still live in the Philippines (Nick Nicholson is one of them).

Anyway, as I mentioned earlier, even most genre film fans don't know these films. Or even if they know them they don't give a rat's ass about them. Well, a couple of us know them and are gone on 'em! (i.e. enjoy them immensely). You can find us hanging out in the Filipino thread over at Dvdmaniacs. Anyway, I think that's enough for now, I'll probably write some incisive piece on all this shit later. Sufficient to say you should try and check out some of them. A good place to start is PHANTOM SOLDIERS (check the trailer in the above) directed by Teddy Page who unfortunately passed away in October (October 8, 2008). The film almost ventures into horror movie territory as the enemy is not only the Vietcong but also, as the title suggests, an army of ghostlike soldiers! Over-the-top entertainment guaranteed!! 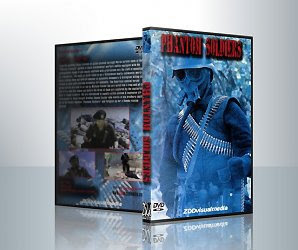 "The Jakarta Post" has just printed yet another SUZANNA related article. This time not about her as such but about Didin Syamsudin who worked with her as her makeup artist for many years all the way from SUNDEL BOLONG (aka Ghost With Hole) in 1981. 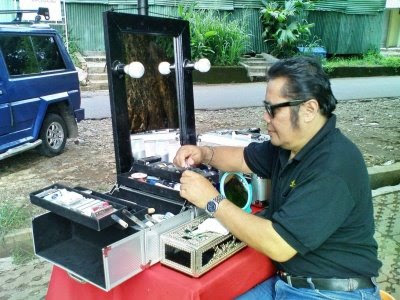 If Didin Syamsudin's professional life could be summed up in one line, it would probably be "making horror faces since 1980", and even that would be an understatement.

Born in Cirebon, West Java, 55 years ago as an only child, Didin excelled in all the art and drawing classes he took. He is now known to possess a cinematic Midas touch, turning every film he lays hands on into a box-office hit.

Whatever it is, Didin certainly charmed Indonesia's Queen of Horror, Suzanna, who passed away on Oct. 16: Didin was the only person to have had the chance to work intensively with her face for an entire decade.

Sparing some time between his two careers -- one as a father of six and the other as a makeup artist -- Didin spoke to The Jakarta Post about his life and working with the Queen of Horror.

"I first worked with her on the set of Sundel Bolong, a very awkward time," said Didin about Mbak Usi, the affectionate nickname he uses for Suzanna Martha Frederika van Osch, who in return called him Diding.

Didin said that during the production of Sundel Bolong (1981), in which Suzanna played a legendary female ghost characterized by a hole in her back, the actress could be very demanding.

"Mbak Usi would get upset over any dirt stains on her costume. The scenes were being shot in graveyards," he said.

There were days, he said, when he had to wash the white costume in the mornings, right after the production team called it a wrap, so it would be ready before shooting began again in the afternoon.

A beginning makeup artist at that time, yet to master the knack of characters and effects, Didin chose to humor Suzanna, keeping this to himself and making sure the actress felt comfortable as her ghost self.

"It was from that moment on maybe that she, in a more commercial term, 'fell in love' with me. She spoke to the producer, saying that she wanted me to do her makeup on the next project too," he said.

The dynamic duo -- Didin and Mbak Usi -- teamed up again in Ratu Ilmu Hitam (The Queen of Black Magic), another Rapi Film production, in 1981.

It was on the set of their second film, Didin said, that the awkwardness was replaced by a feeling of comfort.

"We grew close and working with her felt just right," he added.

Their cooperation was fruitful, and the film was considered a success.

Suzanna was nominated as best actress for her role as a desperate woman seeking vengeance through black magic in Ratu Ilmu Hitam at the 1982 Indonesian Film Festival.

"Maybe I'm a bit weird," Didin said about the way he works. "When an artist trusts me 100 percent, I will work it all out. But if they don't, then I won't bother.

"When I do my work, I do it as if I was doing my mandatory praying. I start with a prayer and I do everything seriously. I always refrain myself from swearing or uttering negative remarks."

Didin began his career as a makeup artist in 1976, after he was persuaded by a friend to help out on Perkawinan Dalam Semusim (Marriage in a Season), directed by the late Teguh Karya.

After he crossed paths with Suzanna in 1980, he continued doing the makeup on almost all her horror films, including Nyi Blorong (1982), Telaga Angker (The Haunted Pond; 1984), Ratu Sakti Calon Arang (Calong Arang the Powerful Queen; 1985), Ratu Buaya Putih (The White Crocodile Queen; 1988) and Titisan Dewi Ular (Reincarnation of the Queen of Snakes; 1990).

He designed Suzanna's costumes and, most importantly, designed the arrangements of the jasmine -- the flower that appeared in most of her films.

"Mbak Usi really followed the laws of being a horror actress," Didin said. Before a shoot, he explained, Suzanna would conduct puasa mutih, a fast in which a person drinks only water and eats only white rice.

"She also regularly visited Nyi Ratu's room in Samudra Beach Hotel. Believe it or not as you please, but I think these things exist," he said.

Shortly after her burial, Suzanna's husband, Cliff Sangra -- her junior by 20 years -- denied rumors his wife had frequented the hotel room to worship supernatural or mystic powers.

The hotel room in question is room 308 of the Ina Samudra Hotel in Pelabuhan Ratu, West Java, which is dedicated as a show of respect to Nyi Roro Kidul, the queen of the southern sea of Java. Legend has it that the queen also has a daughter named Nyi Blorong.

"These mystic occurrences, I believe they do exist. How can I not? I have had my share of unexplained incidents too," said Didin.

Didin claims that as a child -- and this was later confirmed by gifted people he met along the way -- he was often spared from being involved in potentially dangerous situations by an external force he could not control.

"Later on, people who could see spirits said there was a genie accompanying me," Didin said.

But it isn't just spirits and ghosts: Didin is also popular among the living. His specialization in the art of makeup for characters and special effects has resulted in his involvement in a variety of successful productions, including TV soaps, films and even public service announcements.

Some of his recent work can be seen in Riri Riza's Gie (2005), a film about an activist named Soe Hoek Gie, Nia Dinata's Berbagi Suami (Love for Share; 2006) and Hanung Bramantyo's Ayat-ayat Cinta (2008).

"I have taught 15 students how to do makeup for films. One of them is now a lecturer in Yogyakarta, while the others have begun their own careers," Didin said.

But the problem with today's makeup artists, he said, lies in planning and sensitivity.

"Nowadays, I see women going to sleep in their houses in soaps on TV and can't help but wonder what is up with their gaudy make up."

He believes the purpose of the makeup department in a production is not to provoke negative comments about a "good artist with lousy makeup".

After devoting 22 years of his life touching up makeup and preparing costumes and effects for Indonesian films, Didin said the secret to great makeup was simple.

"It's all in the way you wash your face," he said.

Link to the article in the "The Jakarta Post".
Posted by Jack J at 12:49 AM No comments: