So you're happy with your *uncut* DVD release of BURIAL GROUND, eh? (PART THREE) 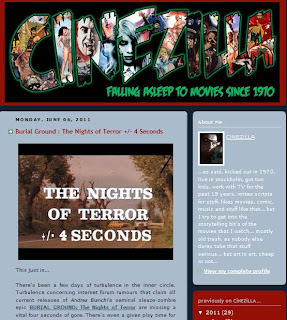 My gawd! It's like a virus that won't die. What rabid beast have I unleashed! Now it's over on Cinezilla as well! FOUR SECONDS!!! Check out Jason's second by second, frame by frame run-down of the cut vs. uncut scene!!! Go here, tell him who sent ya!
Posted by Jack J at 8:31 PM 4 comments:

So you're happy with your *uncut* DVD release of BURIAL GROUND, eh? (PART TWO)

Unless you have the brain capacity of a fruit bat (old Damon Foster joke from Oriental Cinema) I'm sure you remember my post about my recent purchase of the fully uncut Japanese VHS release of BURIAL GROUND (aka Zombie Nattens Terror / Nights of Terror / Zombie 3) - otherwise go here.

Half of the reason I did that post was to mock BURIAL GROUND fanatic Joachim "Jocke" Andersson in Sweden who lives and breathes that film. I mean how many times can a sane man watch that piece of trash! Haha. I'll admit it's a highly entertaining film but good? No. But then again, as you know, I enjoy Bruno Mattei's wrost pieces of garbage simply because they're entertaining.

I received the Japanese tape today and right away I had to make a video to post on Facebook to even further mock Joachim and the rest of his anti-VHS commie friends in Stockholm, Fred and Jason. The video turned out to be a masterpiece and you could be fooled into thinking it were an early effort directed by a young Richard Kern so obviously I'm gonna re-post it here. However, like I said it was meant to be posted on those gents' FB pages and that's why half of it is in badly conceived Swedish. My apologies to other Swedes. I didn't attempt to mock Sweden (as a matter of fact I love Sweden). I would have mocked Joachim no matter where he comes from, hahaha. Oh, and there was some debate on FB of whether I'm wearing pants in the video or not. I think I got most of them convinced I really am wearing pants.

Finally: the missing scene! Mein gott! It's like watching an entirely different film! My friends, this is how director Andrea Bianchi originally wanted his social comment to be seen. Not as that abomination which the producers re-cut to please the international distributors who just wanted mindless escapism. This is his rare uncut, unedited, untampered-with masterpiece that so few people have seen! This is his long lost director's cut that DVD labels around the world don't want you to see. I give you: the missing four seconds!
Posted by Jack J at 4:54 PM No comments: