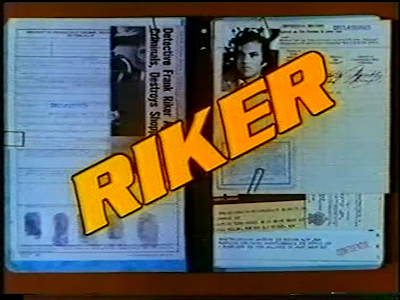 "Riker" is a brutal American TV cop show from 1981. It ran on Danish television shortly after its premier on American TV. I'm not sure of the exact year but around 1981/82. Riker was kind of a TV version of the Dirty Harry character.

I watched the complete run back then but unfortunately it was before we got a video recorder in my house and the show was never re-run on Danish TV. I've been trying to find the show for the last 4 or 5 years ever since a buddy of mine asked me if I remembered "Riker" and knew where to get hold of it. I must admit, until I was asked about it I had actually forgotten all about "Riker" but when he mentioned it I remembered it right away.

For several years I've tried to find info on it and if it was available anywhere. I've posted about it on about every movie forum I'm a member of, I went looking for bootleg versions at every bootleg store on the internet, I asked friends if they'd taped the show or knew of someone who had. And I came up with ZILCH!

If you've been with me for a while you'll remember I've posted and re-posted about it on this blog for the past two years (see the old posts here). At one point someone left a comment and claimed to have the series and they'd get me a copy and then... nothing! So for months on end I kept bugging them to get me the promised copy but they had one excuse after the other; "I got divorced and my stuff is in a mess", "It's at my mum's place", "It's buried in thousands of tapes in a basement", "My mum threw it away" (I think the only excuse missing was "My dog ate it"). And this went on for MONTHS!!! .\_/.

But LO AND BEHOLD today I finally got hold of the complete series!!! Argh, this is too awesome!!!

A while back, someone on the Danish film collector scene saw one of my FB posts about a very rare Danish music documentary (OMKRING EN SORT SOL - ET PORTRÆT AF SODS) which I taped off TV in 1984 and they asked me for a copy. Needless to say, I said "sure" and, for whatever reason, my film buddy had a look around my blog and noticed one of my posts about "Riker".

Imagine my surprise when he wrote and said something to the effect of: "By the way, I know this guy who's been talking about this recently - and he's got a copy!" Well, it took me about two inches of a split second to write back (with almost trembling hands) saying can you get me a copy?

And now... finally... I've got my very own DVD-R copy. It took a while to finally get it (my buddy is even slower than I am!!!!!!) but I've got it now. I feared that the guy who taped it probably only had one or two episodes, or maybe he'd have one and a half episode on an old video tape but as it turned out he actually taped the entire series (i.e. 5 episodes).

I watched the first episode tonight and what can I say... IT WAS LIKE TRAVELLING BACK 30 YEARS IN A FUCKEN TIME MACHINE!!!!!

I didn't remember the entire episode but I vividly recognised two scenes, one of them had actually stayed in my head all thru out these 30 years... in a restaurant shoot-out Riker shoots a crook three times thru a bar without being able to see the guy. Like I said, the show was very brutal for its time. The minister of culture (or whatever, and I forget her name) actually demanded that Danish television cancel the show because she thought it was too violent (fortunately they refused). I remember it was quite an issue in the media at the time.

Anyway, like I said, I watched the pilot tonight and it was bloody great! The picture quality was alright and considering the DVD-R is off a 30 year old video tape it wasn't bad at all.

Ultra huge big thanks goes out to the two fine gents who finally made me able to re-visit Riker!!! 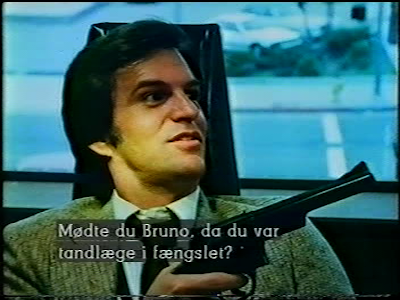 In my previous posts I've posted this episode guide which I got from an on-line source but either the guide is fucked up or American TV broadcast the episodes completely out of order as the first episode (which contains Riker's origin) is "Busted Cop" which is listed here as the last episode. :/