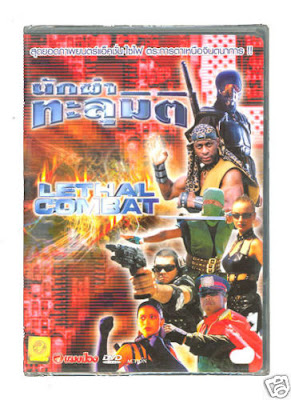 Trying to get hold of EVERY Yukari Oshima film ever made is more time consuming than trying to pick lice off a bum's bum. But last night I managed to get hold of one that I wasn't even really aware of (well, I was a bit; Someone told me about it but I looked out the window and said "yeah yeah"). I thiink it's one of the films she made in the Philippines with her hubby Phillip Ko. The title is LETHAL COMBAT, also released in Australia as Lethal Combat: Techno Warriors 2 (as an unrelated sequel to another Phillip Ko film called, well, TECHNO WARRIORS and also Computer Hero). The DVD I'll be getting is from Thailand (fullscreen + English dub).