I bought MEET THE FEEBLES on ex-rental video in OZ sometime in the 90s and it's one of Peter Jackson's first three low-budget gore flicks that I love regardless of the many viewings and no matter how many yrs have passed thru the time glass! xD
I guess I ought to get hold of this on a little shiny disc. :D

My poster can kick your poster's ass! 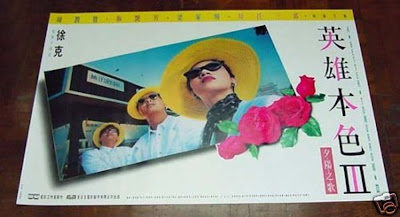 I received this awesome poster in the mail today! It's from Tsui Hark's A BETTER TOMORROW 3 and it's the original cinema poster from the Hong Kong release in 1989, and it's Chow Yun Fat and Anita Mui on the front (sorry, the last guy's name escapes me). I already knew the image from various VCD and DVD releases and for quite a while I've been thinking it would be cool if the picture had actually been used for a poster. Well, lo and behold, a couple weeks back I discovered an eBay seller in Hong Kong who had a poster with that exact image. Yay! Spiffy!

The film itself is really good. Quite a few fans think it's a lesser film than John Woo's first two entries to the series but I beg to differ; I think it's just as good a film but OBVIOUSLY it's a DIFFERENT film. It's a film about people set in a difficult (i.e. war torn) political environment. It's not a heroic bloodshed film along the lines of A BETTER TOMORROW 1 & 2 (although it does get violent aplenty!).

There is a lot of confusion of which version is the uncut one and how long the longest version runs. It is rumoured that a 145-minute version exists and someone even stated this as a fact on the film's Wiki page but I highly doubt this is correct!! I have yet to find just one person on a message board, or in the real world, who has actually watched this legendary 145-minute version. Apparently, a Taiwan VCD is supposed to contain this version but I own a Taiwan VCD and although it says 145 on the back it only runs 130 minutes! I guess there could be another Taiwan VCD release but if that's the case I wonder why no one on the well known Asian boards have it! I think this mystical 145-minute version is an urban legend! The Hong Kong cinema print runs 111 minutes and there are other DVD and VCD versions that run for much longer but none of them surpass the 130-minute mark! You can read about the various versions on Asian Dvd Guide here.
Posted by Jack J at 3:36 AM No comments: