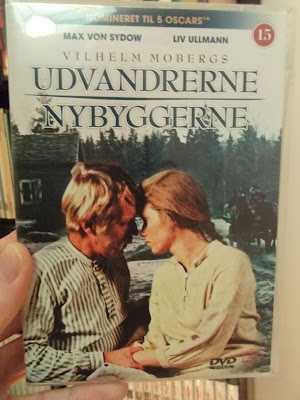 ...skip to 42 years later and I'm finally re-watching UDVANDRERNE / NYBYGGERNE (The Emigrants/The New Land)!!! Directed by Jan Troell and starring Liv Ullmann & Max von Sydow. It's hard to fathom that Sydow played the old guy in THE EXORCIST 3 years later.
When I watched the films in '74 they were broadcast as an 8 part tv series and I've decided to split the two films into 4 parts (the two films run for 6+ hours). I hated the films as a kid, now I love 'em. Oh, and needless to say, to re-create the atmos from 1974 ... I'm watching the films in black & white!
Posted by Jack J at 1:00 AM 8 comments: