AWE off the radar

Almost a fortnight ago, on July 16., I noticed their web-site had disappeared from the Internet and their blog is gone too!

I wrote AWE main-man Jan Schmidt and asked what the hell is going on but received nothing but an auto message saying his email address doesn't exist. I also sent an email to AWE main-man #2 Kenneth Eriksen and asked the same question (this was 3-4 days ago) but never received a reply at all. Huh?!?! What's going on??? Is AWE closing down, have they gone into bankruptcy or what?

I spoke to someone who had met someone else who had spoken to someone whose name I don't recall but who is working for the two gents and this someone said they were on holiday. :-O I don't get it; if this is really the case I must admit I think it borders on less professionalism than I'd expect. How can you let a big professional business disappear off the radar just because you go on holiday. Besides, when I wrote to Kenneth Erikson I used his www.absurd-online.dk store address but there's absolutely no mention on his web-store front that the shop is closed for the holidays. So how about people who order DVD's???

I'll await the outcome of this with my breath held back in anxious anxiety (yeah right).

PS: The tampon girl has nothing to do with the contents of this post nor is it a comment on that post but I thought I needed something FUN to go with the otherwise dull text. Thanks to Kenneth M for the cutie.
Posted by Jack J at 10:53 PM 3 comments:

hey free monies for ya

I just won all this money but, really, I have no need for money so it's yours if you want it. Here's the details:

This is to notify you that your e-mail address was entered during the annual Euro Milliones Lottery
selection Draw and have won the sum of 470,000 euros.

Contact below claim officer for immediate process of your claim; Remember to quote
these numbers below for verification by the company.

You should include Your Name, Address, Sex, Age, Occupation, Nationality,
Phone numbers and Fax number.

I wonder if anybody is really that gullible? And I love the fact they don't know the plural form of 'million', haha (not to mention the proper use of full stop in English instead of a comma before thousands. So in reality the email tells you you have won €470, haha).
Posted by Jack J at 6:30 PM No comments: 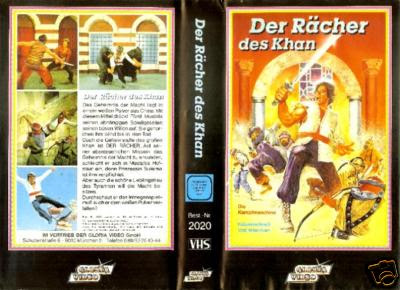 I watched the Turkish adventure film KARA MURAT SEYH GAFFAR'A KARSI last night. It stars Cüneyt Arkin as a hero fighting an evil dictator. The film was the last part of an ongoing series that ran between 1972 and '76. The series contains these films:

Mostly you're left in the dark as to what's really going on in Turkish genre films as so few of them are dubbed or subtitled into other languages but fortunately KARA MURAT SEYH GAFFAR'A KARSI has been released on VHS in Germany so for once I could actually follow the plot closely.

Anyway, this isn't a review so suffice to say the film contains lots of action, violence, nudity, and Cüneyt Arkin doing what he does best: ridiculous stunts!! LOL. In one scene Arkin is fighting two crooks. He knocks one of them unconscious but the other one tries to escape on a horse. Arkin picks up the unconscious guy and throws him at the guy on the horse (and hits him even though he was riding away at full speed!!). Haha. Great stuff. In other scenes Arkin flies thru the air as if there's no gravity laws. Very enjoyable! :D

Next up in the world of wild flicks from Turkey at Casa J cinema is LIONMAN (aka Kilic Aslan) which I recently scored on English dubbed NTSC VHS. Yay!

Thanks to Ayman Kole for info about the Kara Murat series. And also thanks to "Joe" for the info on the Turkish/Persian co-production (they are both Turkish Aussies and they both live in Sydney and yet they have never met, haha.).