I was watching Andreas Schnass' VIOLENT SHIT from 1989 on video last night and thinking it's a pity gore movie fans don't make cool little over-the-top splatter movies anymore like they used to a decade and a half ago!

I know people who would (and do) dismiss stuff like the VIOLENT SHIT series but me I quite like these movies, maybe because I don't expect anything they're not! I mean these little flicks are made by splatter movie fans in their mum's backyard on a 10 dollar budget. They're just fun amateur/underground movies to make and fun with. I never quite understood how come some "serious" fans dismiss them on the grounds that they're badly made? I mean... DUH! Of course they're badly made. Anything made by "filmmakers" whose "schooling" comes from watching THE EVIL DEAD, RE-ANIMATOR and DAWN OF THE DEAD is obviously gonna be crappy, haha. But I still enjoy them heaps!

Uhh, and talking of which... look what I just bought from my good mate Kurt (aka Member-X of Cinehound) in Finland: 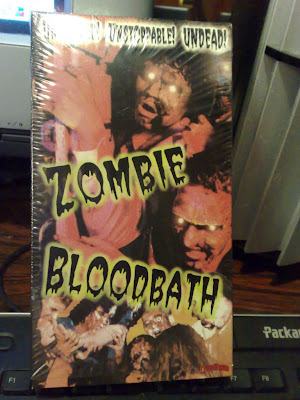 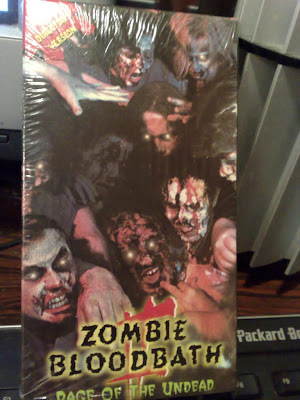 ZOMBIE BLOODBATH 1 & 2. There's also a part 3 but he didn't have that one. Part one was listed on Amazon.com yesterday and the price was a whooping 999 dollars!!! I'm not kidding! Needless to say, I didn't pay anything in that vicinity. Besides, if you're curious about these films now you can get them (all three of them) for very little on a double disc dvd - and yes I have that too but, you know, I collect video! :D
Posted by Jack J at 9:08 AM 11 comments: