I first saw him as one of the two "brothers" in FLAMING BROTHERS opposite Chow Yun Fat many years ago on a shoddy VHS dupe without subtitles. It was one of the first HK films to be reviewed in "In the Flesh" fanzine (from the UK). He was in tons of films and produced even more. He made films already back in the 60s but the ones I'm most familiar with are the later ones from the 80s. Last year I bought the MADE IN HK video tape of FLAMING and the re-released HK dvd too. Not so much just because of him but simply because this is a cool heroic bloodshed film - but at the same time he was someone who made an impression! And now he's gone at the way too young age of 64. RIP, Alan.
Posted by Jack J at 5:03 AM 1 comment:

Check out this uber cool trailer that someone sent me (and which I just uploaded); It's for the highly entertaining Richard Harrison HK movie SCORPION THUNDERBOLT which is one of my two personal favourites among the many Richard Harrison cut & paste films there were made in HK in the 80s. The other one is MAJESTIC THUNDERBOLT.

The trailer is cool on it's own - but in addition to this it is also awesome because this is the fully letterboxed trailer! It's very rare to see a letterboxed trailer for these films, just as rare as it is to actually find the films in the letterboxed format! The only release of SCORPION that I'm aware of that is lbx is an old video tape from France. All other video tapes are fullscreen and there are NO dvd releases anywhere! And get this, the owners don't have a lbx print either! Anybody who buys the film for distribution would get a fullscreen print!!! In other words, you need to overlook the less than perfect quality of the video tape the trailer origins from. This is the only way to watch this!

About these films in general:
If you've only watched some of the lesser (in my opinion anyway) ninja films then you may feel a little let down by them. I admit not all of these films are great - or even very good for that matter. But if you're into wild and weird worldweird cinema then you really need to give at least SCORPION THUNDERBOLT a shot. It's head and shoulders better than the rest of the pack (well, except for MAJESTIC which is pretty cool too like I said)! And by the way, this isn't a ninja film! It's a mix of revenge, monsters, sex, and horror!!!

And if you'd like to know more about these films and which films the original prints came from I urge you to check out Jesus Manuel's blog Golden Ninja Warrior Chronicles. He's just finished a six part series called "Curse of the IFD THUNDERBOLT series". 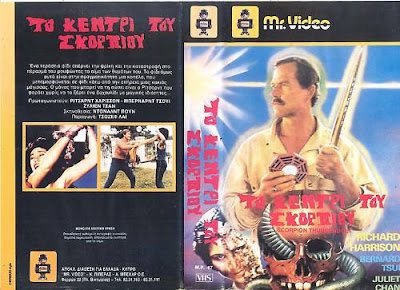 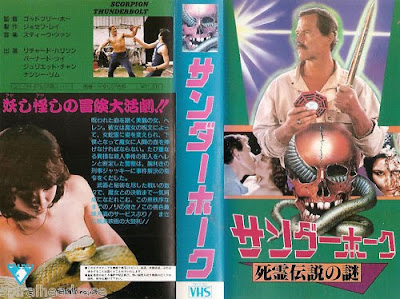 Thanks to my friend who sent me the trailer. I'm not sure if I should mention him by name as he's with a video company so I'll play it safe and leave it out, but thanks mate!
Posted by Jack J at 12:40 AM No comments: