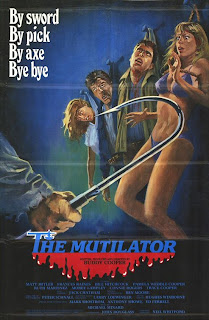 I re-watched THE MUTILATOR this morning and what can I say other than it's a crime against all humanity that this film isn't on official DVD yet.

THE MUTILATOR (originally entitled Fall Break) is a totally enjoyable slasher flick about a group of youngsters who go to stay at a beach house during their fall break. The house belongs to one of the guys' dad. When the son was a kid he accidentally killed his mum (we see this during the beginning of the film) and *maybe* the dad is still mentally fucked up about it. Anyway, you don't need to be a rocked scientist to figure out what happens during their stay at the house - I mean I did mention it's a slasher. ;o)
As I said THE MUTILATOR is heaps of fun and there's some awesome gore scenes in it. Highly recommended.

When I do these blog posts they're not always made up on the spot. Sometimes I've had an idea for a while and sometimes even made up half a post even weeks before posting it. A little while ago I stumbled over this rabid horror movie fan on YouTube called Joe (aka J) who keeps uploading videos of his VHS collection! Yes quite fanatical, LOL, but that's alright. xD. Besides filming his own collection J is also a big fan of THE MUTILATOR and about a year ago he covered the film extensively; He did an interview with director Buddy Cooper, he had Cooper show him his basement (with equipment from the film, pretty cool when you think about how long it's been since the film was made, i.e. 1984), and he went to the two outdoor locations that were used for the film.

I'm posting all his videos here and if you're not a fan of the film, or haven't watched it, you might think it's overload, haha. But on the other hand if you have watched it and if you're a fan then I'm sure you're gonna enjoy all of this. Yes, it's all got that FAN VIBE to it but to me that's actually the ONLY way of getting to know something properly. Who gives a fuck about lame ass superficial write-ups when you can have something hardcore in-dept made by someone who cares for the genre! So check out this stuff, it's great fun and if you haven't already got it I suggest you get hold of THE MUTILATOR.

By the way, I mentioned at the beginning that there's no DVD release of this. If you make a search on Amazon UK you'll actually find a reg. 2 PAL DVD release from Vipco of the film, however it's a fucken bootleg. No kidding! And besides it's fucken cut so you're better off getting hold of an uncut VHS. Just beware, if you go for the US NTSC tape there are actually two different versions; an R-rated version and a fully uncut unrated version. My own tape is the uncut tape from Holland (on the "Video For Pleasure" label).

As I said earlier, I've wanted to do a post about this film for quite some time but since I've waited for so long needless to say someone beat me to it, haha. Mark from Phantom of Pulp blog wrote about his experiences with the film the other day. Mark used to work for a video company in Melbourne years ago and found himself in the INHUMANE dilemma of being asked to cut the film for violence! What a fucken nightmare (not least when you love gore movies like Mark does). Read his cool article "Mutilating the Mutilator".


The Beach Cabbin location how it looks today:


The school location from the beginning of the film: