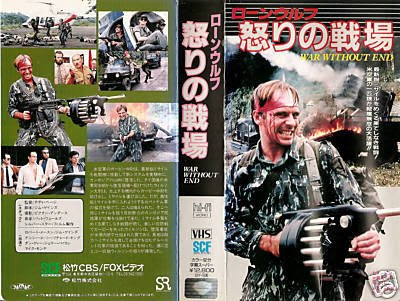 One genre that is totally neglected by almost ALL genre film collectors is trashy Vietnam War movies from the Philippines...

The thing is, much like Indonesia and Hong Kong the Philippines had a thriving film industry during the 80s. Heaps of films were being made and, well, I don't really have anything to back this up but my gut feeling is that while the other prolific film territories in Asia did try and make money on export to foreign markets The Philippines did it much more gung ho. Most of these films were filmed or dubbed in English. In Hong Kong they didn't even bother to make proper subtitles. And maybe one of the reasons why the Philippines churned out so many Vietnam War movies was the international appeal; Firstly (I'm guessing here) they thought the American market would be interested in these movies because of the US involvement in the war, and secondly they would have appeal to a Western audience because the main characters would have to be Americans - or at least white actors playing Americans (or semi-white actors who sometimes had dreadful accents and/or spoke totally broken English, haha).

Anyway, I'm not going to talk too much about all this here now. The reason I'm mentioning this at all is because, da-da-daaaa, I have a new site! Yep, a site completely and only devoted to these trashy Filipino war flicks! It's totally... obskuriøst! Haha. To the best of my knowledge I think it's safe to say there are no other sites of that kind anywhere in Cyberspace. As I said to begin with this is a completely overlooked genre... and if you were to say "and for a reason" I wouldn't disagree with you! Most genre film fans don't like war movies cos they're boring (I find ordinary war movies boring!) but do yourself a favour and check out my site anyway. The thing with Filipino war flicks is they AREN'T boring at all because they're so full of trashy action it's unbelievable. As Fred Adelman mentioned over at Dvdmaniacs in a response to one of my posts; 95% of these movies are entertaining!! I couldn't agree more. How many genres can take credit for the same!

The site is still in its infantry, ehh, infancy so there's only a handful of reviews but there's quite a few scans and stuff and there'll be more soon. Check it out.

Finally, do check out this great trailer for the VERY cool Teddy Page directed movie PHANTOM SOLDIERS (which is almost a Filipino HORROR war movie!!)