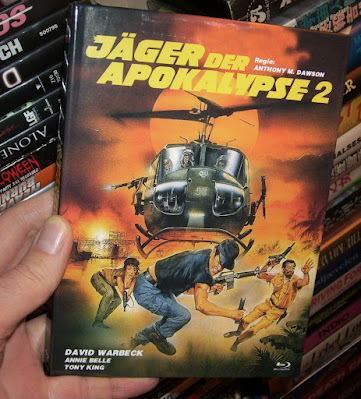 For years I've been hoping that some label would release TIGER JOE on English friendly dvd or bluray, and finally (actually last year) a German label put it out on bluray - including the film's English audio!
I got the blu a couple of weeks back and it looks great. I haven't seen too much (any!) online talk about this. Maybe fans don't even know about this English friendly release AS THE COVER DOESN'T STATE IT CARRIES THE ENGLISH DUB. The cover says German and Italian audio! It doesn't actually have Italian audio but English.
TIGER JOE is a sequel (kinda) to THE LAST HUNTER. No, it's not quite as good, but I still like it a lot. It's got David Warbeck in the lead for crying out loud!
The extras:
Audio commentary by Troy Howarth
16 page booklet (all in the Kaiser's German)
interview with Margheriti's son about these films (in Italian, subbed in English)
German & English audio. No subs for the film.

The version that I bought has a bluray and a dvd. Somebody mentioned there's also another German dvd release in English, but the cover for this bluray clearly states this is the first fully uncut German release, so be careful if you're looking to get another dvd release.
I got mine from D&T Mailorder in Austria. There are various different versions (different covers, same contents) but I think stock is getting low so be quick if you want one. 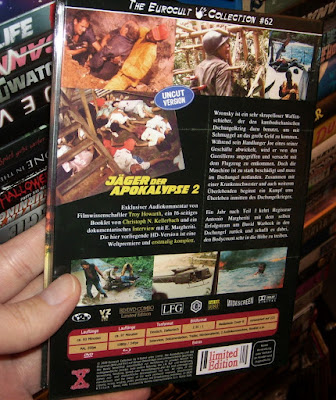 Trailer from Danish VHS tape (thanks to Diabolik)

Alright, things are moving at a snail's pace here but at least I've got something GOOD for ya this time 'round: Simon Miller over at EXPLOSIVE ACTION blog and YouTube channel (with help from Andrew Leavold) has put together an awesome documentary video about Teddy Page's Vietnam War flicks. The doc runs just under an hour and you should check it out right away. The film actually had a (very) limited DVD-R release but needless to say it sold out right away.
- Jack
----------
Description from Explosive Action:
"TEDDY PAGE (real name Teddy Chiu) is one of my favourite trash film directors. Throughout the 1980s he made some of the most entertaining, low-budget, explosive action jungle films you will ever see.
With the help of certified Weng Wengologist and Filipino film expert ANDREW LEAVOLD ("The Search For Weng Weng"), I explore the English language action films that Teddy churned out between 1983-1995.
My interest in Teddy Page's films started with Phantom Soldiers on Japanese VHS in 2010, and the obsession has only increased over the years, encouraged by the writings, documentaries, blogs and conversations with people such as:
Andrew Leavold: Bamboo Gods and Bionic Boys + The Search for Weng Weng
Paul Cooke (RIP): Ballistic Blood Bullets
David Zuelo: Tomb it May Concern
Jack Jensen: When the Vietnam War Raged... in the Philippines
This film was a passion project and labour of love over five months, and is my most detailed and intricate video yet with a lot of editing and sourcing of footage."
- Simon Miller
Thanks for the mention, Simon!
And here's Andrew Leavold's description from his web-shop
"Filipino action fans rejoice! Our good friend in Sydney, Simon Miller (Explosive Action) has made this awesome mini-documentary on Filipino Z-grade action director Teddy Page (real name Teddy Chiu, aka Irvin Johnson etc)… and he invited me to participate! Almost an hour of blood, guts and exploding huts, with Simon’s commentary on each film (Blood Debts, Hunters Crossing etc), and me filling in the historical back-story of Teddy and Kimmy Lim’s no-budget action film factory Kinavesa/Silver Star. Simon has made ten hand-numbered copies on DVD – and Trash Video Archives has our exclusive mitts on numbers 6 to 10. So grab one now, as once they sell, they’re gone forever…"
- Andrew Leavold
Like I mentioned in the above they're already sold out!
Posted by Jack J at 6:25 PM No comments: