I went to a big indoor second hand market in Melbourne around... well, early 1990s anyway, and some guy was selling all his video tapes. I had a look and picked one; Romero's original THE CRAZIES (aka Code Name Trixie). I asked the guy why he was selling his cool tapes to which he replied that he and his brother had way too many tapes, they simply haaad to get rid of some of them. "We have a big bookshelf with tapes like that one at home " he said and pointed to a bookshelf that was about half the size of any of my bookshelves, haha. Oh well, I got THE CRAZIES and I still have that ol'e Aussie tape in perfect condition. I always liked the film, it's not Romero's best but I definitely like it more than what many other fans do. So is this remake gonna be a bastard from Hell? No idea but in contradiction to quite a few of my fellow posters on Dvdmaniacs I quite like the trailer. So should you. xD 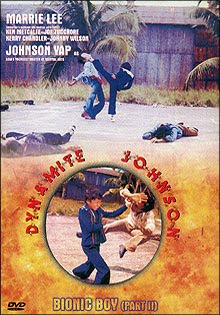 I re-watched Bobby A. Suarez's Filipino movie DYNAMITE JOHNSON: Bionic Boy part 2 on DVD last night. The film is out from from Starlite Video (aka Global Video) in South Africa which also put out the first BIONIC BOY film and the related THEY CALL HER CLEOPATRA WONG.

All three films are quite enjoyable and all are unfortunately quite difficult to get hold of. CLEOPATRA WONG plus yet another Suarez film, ONE-ARMED EXECUTIONER, are going to get a reg. 1 release (probably) at the end of the year so that's pretty good. Brilliant actually. But it still leaves the two BIONIC BOY films hanging somewhere in the void, unfortunately.

Anyway, what I really wanted to address is some complete nonsense which is mentioned in regards to all three films on the German film data base OFDb, where it says: 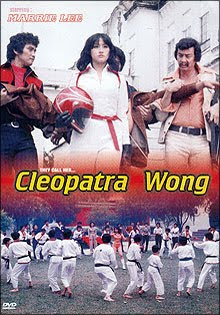 What they're basically saying is that all three DVDs were sourced from video tapes and that the picture and sound is crap! Well, it appears that whoever wrote the comments (someone calling himself "Zeiram") obviously couldn't distinguish between a less than perfect transfer from film print to DVD, and a worn video tape!! And that's exactly what this is; The three DVDs are so not sourced from VHS but from real film elements! I have no idea of whether they're from 35mm or from 16mm but all three films are presented in the fullscreen format which could indicate they're from 16mm (but don't run with that as solid proof as I really have no idea!!).

The reason the picture is less than perfect in parts (only in parts! Most of the films look fine!!) is that these DVDs weren't released by some big-ass company who had enough money for proper transfers and restoration. Starlite Video is actually just one guy who's sitting on a bunch of rare film prints which he inherited years ago from a family member who owned an old cinema. 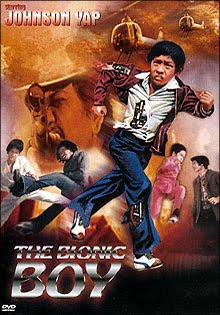 In my opinion the prints are alright. No, they're not perfect and if you need everything to be HD then I'd advise you stay clear of these DVDs. But if you're into worldweird films and excitement found outside of Blockbuster then I would suggest you pick up these releases when you find them. Or rather... "would have picked them up" as they're actually out of print and are already rare. According to the guy behind Starlite/Global they only sold around 300 copies each so there won't be a any reprints and the handful of other Filipino films he has in his possession and which were planned for release won't be released now. Boo-hoo. One of them was even COSA NOSTRA ASIA which has never been released anywhere to the home cinema market in English! :o(
Posted by Jack J at 8:26 AM 4 comments:

aka FIRST VAMPIRE OF CHINA 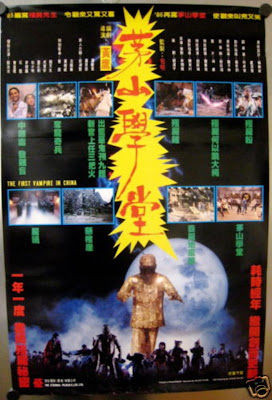 I just won this poster on eBay. It wasn't that expensive and no you're right the poster isn't all that good either, HOWEVER it is for the extremely rare HK horror movie FIRST VAMPIRE IN CHINA from 1986. I have the movie on a fullscreen Japanese tape (Cantonese dialogue, Japanese subs). There's also a letterboxed and English subtitled laserdisc somewhere but it's very rare and I've never even seen it once. FIRST VAMPIRE IN CHINA isn't in the same style as the dark & nasty 1980s HK horror flicks I usually write about. This is more in the same vein as the MR VAMPIRE films, i.e. whacked out no-holds-barred craziness galore!!!

Return Of The Demon director Wong Ying dabbles in vampire territory, with an amusing opening talking of indeed the first vampire in China. Threatening to take over the country along with his hordes of other vampires, luckily there was an earthquake to bury them all. Cut to the early 20th century and the new mayor Alexander Tso (Charlie Cho) arrives with his dopey assistant played by To Siu-Ming to inspect the town, the countryside and to generally wreak havoc with their greed and ignorance. Trying to extract what they think is a jade treasure (but is in fact the jade clothed first vampire), they blow up the burial site where other vampires are laid to rest and it's chaos from there. Master Kent (Sek Kin in the Lam Ching-Ying role) may be able up this mess. By no means a yet to be discovered classic, Wong Ying provides energetic pace throughout, with Charlie Cho and To Siu-Ming being cocks and literally being transformed into ones after being attacked by an re-animated one! Further energy comes via a scene where Shing Fui-On as a hopping vampire is caught in a skipping rope contraption while Hwang Jang-Lee turns up and threatens to marry off the daughter of Kent, in the afterlife. Also with Anthony Tang, Robert Mak, Chor Yuen and Sai Gwa-Paau. 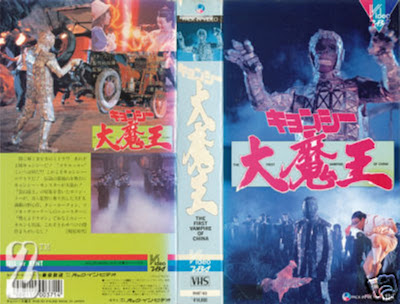 And here's another (way cooler) poster I also just bought; MAGIC COP (1989) starring Mr. Vampire himself, Lam Ching-Ying (this on is easy to get on HK DVD). 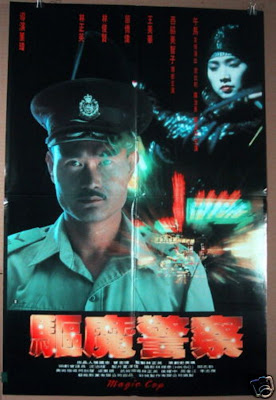