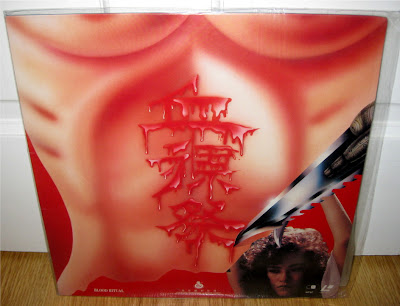 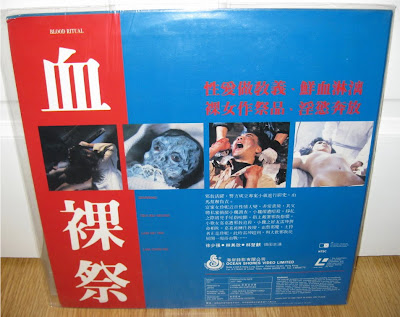 Check out this awesome laserdisc cover for Lee Yuen-Ching's dark and nasty Hong Kong horror movie BLOOD RITUAL from 1989. Or at least I think it dark and nasty. Unfortunately, I haven't watched the movie and (again: unfortunately) that isn't my laserdisc. :-(
There is no DVD release, only old and very rare video tapes and this laserdisc. You can get it on bootleg from Trash Palace tho.

EDIT A FEW HOURS LATER: That laserdisc is NOW MINE!! I won it from a Chinese eBay seller in the UK!! Yay!! SPIIIFY!!! 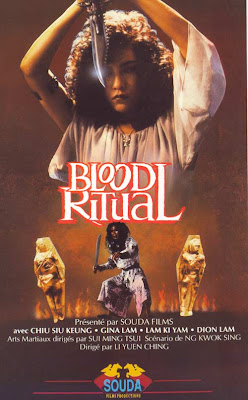 VHS from France
Posted by Jack J at 11:27 PM No comments:

Last of the Matteis

Here's a handful of trailers for Bruno Mattei's last four cannibal and zombie films (plus THE TOMB). He did 2 of each and they are equally crappy and/or enjoyable, depending on how low your tolerance level is. Mine is pretty low so obviously I enjoy them heaps, haha, but I'm not gonna try and convince anybody that these films are in any way, shape or form good or even semi good cos, well, they're not. But like I said, enjoyable and entertaining. And a pleasure so guilty that you probably wanna keep the films out of sight if you're having any friends/relatives/anybody come over for a visit, that is if you value your reputation in any way!! xD

I don't have the last movie, THE TOMB. I'm aware there's a reportedly crappy US bootleg DVD out but I'm holding back getting it as I've just discovered there's a VCD release of it in Thailand and I'm trying to find out if there's a DVD as well (the VCD only has Thai audio). If any of you know about this please let me know. Cheers.

LAND OF DEATH aka Cannibal Holocaust: Cannibal Vs Commando


ISLAND OF THE LIVING DEAD

- And lastly, here's a Mattei tribute by the guy who is usually The Cinema Snob but this video is actually done out of character (if case you hadn't realised TCS is a character he does, lol). Check it out it's pretty good.