"There’s a killer on the loose… a homicidal maniac with delusions of ancient history. Now, can I use your phone?" 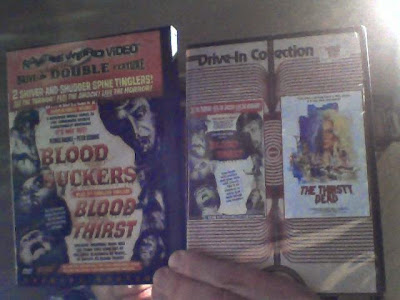 I received my pile of new reg. 1 dvd releases of US-Filipino coproductions a couple of days ago and I just watched one of them, the black & white monster killer film BLOOD THIRST (1971). Vinegar Syndrome have put it out on a double (single dvd) bill paring it with THE THIRSTY DEAD (1974). Both films are also out from Something Weird Video, I've got both those dvd's as well, and I just did a two minute comparison between the two versions of BLOOD THIRST. It's easy to see which one comes out on top, the sheer fact that Vinegar Syndrome's release is the original 1.85:1 aspect ratio and SWV's is fullscreen makes all the difference. The latter print doesn't look bad, by no means, but still, the new release blows it out of the water.
Posted by Jack J at 10:36 PM No comments: