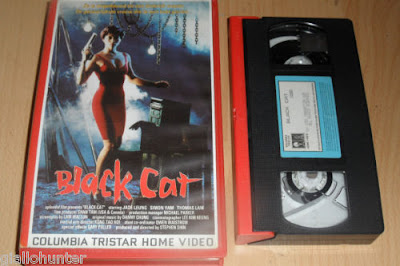 I've just won two different versions of Stephen Shin's cool Hong Kong film BLACK CAT from 1991. The very first time I watched the movie was at a Chinetown cinema in Melbourne in the early to mid 1990s. Needless to say, I loved it right away and still do.

As I'm sure you know it's a remake of Luc Besson's French movie NIKITA. It was also remade in the US as an okay film and then later also as an awful TV series and I believe they've even made yet a new (different) TV series, also in the US. I love the French movie but I actually think the HK remake is the better film!

In contradiction to the original film the HK movie spawned no less than three sequels. When I initially got the film on home cinema format it was a 3rd or 4th generation VHS dupe off a Mandarin dubbed print. It was problematic as some of the scenes in the original Cantonese print are spoken in English (these scenes don't have English subs); In the Mandarin dub they dubbed both the Cantonese and English scenes into Mandarin but obviously didn't provide English subs for the now non English spoken scenes (since it was for the Chinese Mandarin market).

Later I got hold of a VHS dupe off the Dutch video tape (dubbed entirely into English) and it's this tape that I've now won an original copy of. Winning bid: 99 pence!! (i.e. one dollar and 53 cents!!). The second version that I won is the HK laserdisc. xD

The first time I actually bought an original release was in the early 2000s when I bought a VCD from a second-hand video store in Copenhagen; Someone has handed in a box of HK films on VCD. They weren't HK VCDs mind you and to this day I still have no idea as to where they were released. China or Taiwan probably. There's no English text or titles on the cases and some of them had crappy quality. I remember showing the BLACK CAT VCD to a couple of friends at a video night shortly after and towards the end of the film the bloody VCD just froze and despite several attempts it wouldn't finish. Terrible! Haha.

Obviously BLACK CAT is easy to get on DVD nowadays but it's fun to collect these different releases. 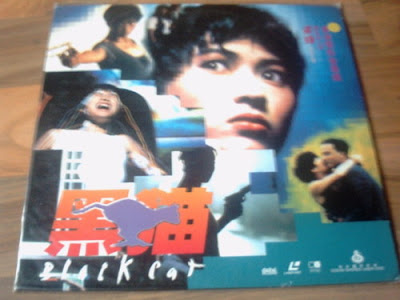 PS: I linked to the HKMDB in the above but it's merely so you can check the film's info, who's in it, etc. I'll advise you not to wast time reading their reviews, unless you want a good laugh. I love the HKMDB for their film info but it seems to me most of them don't actually like HK movies at all. Very strange when you consider it's a HK film data base!! 99% of the reviews of BLACK CAT are 100% negative. I mean... they're so negative it's to the point of being ridiculously funny. Why do they even bother to watch HK films when they obviously don't like them. This isn't a response spurred by this one movie, it's something I've notice for quite some time.

Probably the funniest of these almost aggressively negative reviews:

Embarrassing to watch. This movie doesn't seem like much more than an opportunity for the camera to drool over Jade Leung. We get lots of running shots for maximum jiggle, there's a wet t-shirt scene when she's inexplicably sprayed down by a fire hose even though she's changed to the wall, there's the full backal nudity, and of course the whole thing is shot through with her being sadistically beaten. It's like some thirteen year old boy's wet dream.

And for what? A boring movie that leaves logic on the cutting room floor. I watched this for the first time several years ago and thought it was bad. I decided to give it a second chance last night. My mistake. They should bury this in a cave in one of those mountains next to Manhattan.