5 Deadly Angels arrived at the door! 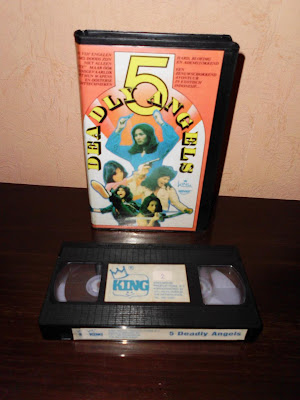 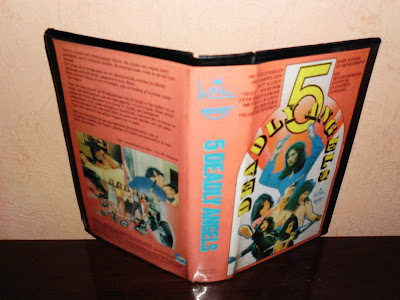 Ahh, after years of trying to find the rare Dutch VHS release of Danu Umbara's 5 DEADLY ANGELSE (aka 5 Cewek Jagoan) I've finally got hold of it!!! Pure awesomeness!!!
- and altho I got it from someone else (in Germany) I'd like to say thanks to Peter in Holland who's spent all his free spare time during the past 17 yrs trying to find a copy for me and who initially provided me with a dvdr copy (and it's his copy that everyone else is downloading and the YouTube clip posted here is also from him!). Very much appreciated, Peter!


I really ought to point out that this goofy sing & dance clip isn't very representative for the movie. The rest of the film contains wild and awesome action! Check Fred's review below and you'll see what I mean. :D

FIVE DEADLY ANGELS (1980) - The success of TV's CHARLIE'S ANGELS (1976 - 1981) spawned many imitators, including this Indonesian action flick. A scientist named Hardy invents a new type of explosive ("With this type of formula, people can blow up mountains without any danger!" What? How is that fucking possible?), but he worries about it falling into the wrong hands ("If crooks get a hold of it, imagine the bloody big bang it would cause!" What a minute, I thought it was safe!).

Immediately after making those statements, Hardy and his girlfriend Yanti (Yati Octavia) are kidnapped, blindfolded and taken to the home of the big boss, Mr. Brutho, who tells Hardy that he either hands over the formula or he will kill Yanti. Fortunately, Yanti (who is an expert marksman) escapes and is saved on the side of a road by Anita (Debby Cynthia Dewi; MYSTICS IN BALI - 1981), a chick in a black leather outfit (complete with black cowboy hat) who beats the crap out of one of Mr. Brutho's goons in super slow-motion, destroying his car in the process.

Anita agrees to help Yanti in her quest to rescue her boyfriend (It seems Anita is tired of being mistreated by the "greasers" in town), but first they have to save Yanti's mother and young sister from the clutches of some kidnappers, leading to a comedic car chase that ends with the kidnappers dying in a fiery crash (Not so funny now, is it?). Yanti and Anita stop at a disco for some drinks (Killing bad guys makes you thirsty. It's a known fact. Look it up.), where they watch Dana (Dana Christina; THE STABILIZER - 1984) sing a disco tune in Indonesian and she agrees to help in Yanti's plight (Dana is an expert knife thrower as well as a singer).

The trio turns into a quartet when crossbow expert Lydia (Lydia Kandou) joins the team and then turns into a quintet when kung-fu expert Lulu, The Lightning Lady (Eva Arnaz; THE WARRIOR - 1981) takes up arms to join the fight. Lulu beats the snot out of a male motorcycle gang in a restaurant (complete with transvestite waitress!), where in one hilarious scene, a restaurant patron swallows a raw egg and coughs-up a live baby chick! When two of Brutho's goons kidnap Anita, the other four girls rescue her and tie-up the two goons, leaving each one of them a "gift": a live crab shoved down their pants!

When Mr. Brutho is finally successful in kidnapping Yanti's mother and baby sister, Yanti and the four superhero chicks perform a daring raid on Brutho's compounds, resulting in death, destruction (including one hellacious explosion) and a helicopter rescue, where each of the women use their individual talents to good effect. Hooray for female power! This is a hilariously bad action flick, complete with awful dubbing (where everyone speaks with an Australian accent), badly-staged action scenes (which are either cranked-up in the camera way too fast or way too slow, giving some sequences, such as the car chases, a Keystone Kops feel, and other sequences, such as the women running or fighting in super slow-motion, a SIX MILLION DOLLAR MAN look, complete with the patented Steve Austin sound effects!) and comedy mixed with sudden tragedy.

That's what makes these Indonesian action films so wonderful to watch. No matter how hard you try, you can't possibly anticipate what's to come next. Director/screenwriter Danu Umbara (JUNGLE VIRGIN FORCE - 1982) consistantly surprises the viewer here, such as when Lydia's obese female assistant Fatsy pisses in her pants when Lydia shoots an apple off her head with a crossbow or the head-scratching sequence where Dana breaks out into song to cheer-up Yanti and we're then treated to a pre-MTV music video montage of Dana singing on a beach while wearing a variety of bikinis.

Particularly funny is the dastardly Mr. Brutho, who precedes all his dialogue by saying "I'm a good man!" and then doing simply awful things, like shooting his own men for fucking-up, siccing his dogs on his girlfriend for trying to help Hardy escape or hanging Yanti's young sister over a pit of poisonous snakes to force Hardy to turn over the formula. The film is also full of oddball characters (one of Brutho's best goons has a scar on the side of his face that looks like a giant leech), explosions and a smattering of gore, so why not sit back, put your brain in neutral and just get lost in the craziness that is known as FIVE DEADLY ANGELS? It's worth the dead brain cells.