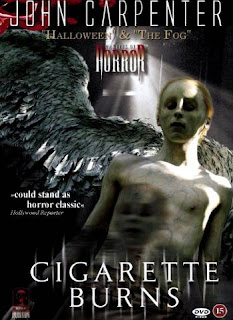 I bought the entire first season of Masters of Horror on DVD the other day. I've only ever watched one episode of the series, that film was DARIO ARGENTO's JENIFER which I thought was pretty good and which was my friend Heine Sørensen's choice for the evening at a film night a few years back (men var det hos Henrik eller Nils? I forget). So, last night I watched my first episode and I deliberately chose John Carpenter's CIGARETTE BURNS due to the feeble fact that Uncut.dk's Caspar Vang gave it a good review three years ago, haha. I mean I'm aware that some of episodes are reportedly crap so I wanted to start off on a high note. So, how was it? I hear you cry out in wholesome unity. Well, Caspar gave it four stars out of five and I can certainly vouch for that! The plot: Some young guy who runs a cult movie cinema gets an offer from a weird film collector (played by Udo Kier) to find a particularly rare print of a film. The film itself is apparently so extreme that a riot broke out in the cinema where it was first shown and it has a rather negative effect on people. This is not a review so it's sufficient to say that CIGARETTE BURNS is quite good and certainly delivers in the splatter department. Udo Kier is always a welcome asset to any film regardless of the film if you ask me. There are a handful of references to real horror movies throughout. Recommended! Now watch the trailer!