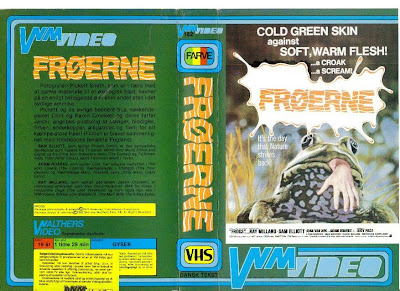 I re-watched George McCowan's FROGS from 1972 tonight. I've only watched it once before, on television (sometime in the '90s). Tonight, I enjoyed my new rare Danish ex-rental VHS (I've been after that tape for almost 10 years so thanks to Henrik Larsen for finally letting go of his copy!).

I remember the TV print being way too dark but the VHS looked pretty good. There's also an MGM DVD and interestingly enough FROGS was included in MGM's "Midnite Movies" series but ONLY on video! Their DVD version is an ordinary release outside the series. Weird (and yes I own the DVD too).

Ray Milland is in the movie and he's always good. There are some good death scenes and the actors are all good. A few reviewers usually complain about the film taking way too long to really kick off and that it has too much dialogue. I guess a lot of people prefer the characters in horror movies to equal the depth of characters in the funny pages. Build-up and getting to know characters doesn't actually hurt a movie in my book. Actually not at all.
Posted by Jack J at 2:34 AM 7 comments: