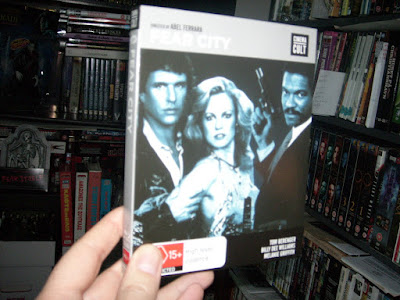 Tonight's viewing...
Abel Ferrara's FEAR CITY (1984)
When I lived in Melbourne it kinda made an impression on me that Fatal Visions zine interviewed Ferrara and the interviewer (Michael Helms) told him a part of Melbourne was referred to as "Fear City".

The blu-ray contains two versions of the film, the shorter theatrical edit and the fully uncut version. The uncut version, however, is actually a hybrid version of the film, it contains the uncut scenes but uses the last alternative scene from the theatrical print. Very odd (info from dvdcompare). The print looks like it's from the original negative except for the previously cut scenes that look like they are sourced from some kind of video tape. It makes the scenes very obvious.