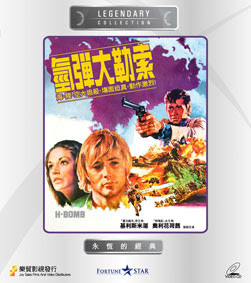 In 1972 Chris Mitchum and Olivia Hussey both starred in Antonio Isasi-Isasmendi's Italian/Spanish/French co-production SUMMERTIME KILLER. That film has become somewhat of a cult movie but actually already in 1971 Mitchum and Hussey joined forces in the Thai/Hong Kong co-production H-BOMB. After having just watched the film it seems to me that this is a co-production where the Hong Kong part is probably just the money aspect of it. The director, P. Chalong, and most of the cast is from Thailand, the film was shot in Thailand, and everything reeks of Thai. Well, apart from the gwailo actors in the lead roles, obviously.

I tried to get this on video about a year ago on eBay but lost out to another bidder. Well, good thing too cos I'm sure all the old video versions are fullscreen (like the ones used for the Youtube clips) and guess what; Joy Sales just put out a fully letterboxed print!

I received my copy from Dddhouse in Hong Kong today and watched the movie right away. And what can I say other than it's great fun! It's a mess... but a fun mess, haha. One reviewer on IMDb writes:

- and, uhh, that pretty much sums it up. LOL. However, just as that reviewer says later on in his review, H-BOMB is a totally entertaining. A lot of stuff doesn't make sense but screw that it's a fun movie. There, I've said it three times now!

The plot is about some crooks in Thailand having stolen a... wait for it... H-bomb! And they're basically up to no good. In addition to this they've bumped off the two best secret agents the US had to offer. What to do, what to do. Hmm, the US and the UN could have sent in troops, the terror squad, the local CID, the police, Scotland Yard, a whole army of secret agents. But no, they send in... Chris Mitchum. Hahaha. It's so fucken hilarious, I mean millions of lives are at stake here and they send in one single agent to solve the case (and they don't even tell the Thais so a couple of times our hero is about to get arrested!!). 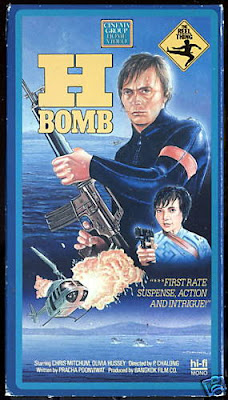 Anyway, enough about the convoluted plot (which was most likely written on the back of a beer coaster). Suffice to say there's lots of action and of course Olivia Hussey is a babe. The print that Fortune Star/Joy Sales have released is as I mentioned earlier a good looking letterboxed print. Well, "good looking" in its being letterboxed but unfortunately it's an old scratched print that was used as a door-stop for 20 yrs. It's got a lot of scratches. As with so many of these releases from FS/JS's this one gets a VCD release way before we're rewarded with a DVD so that's all there is for now. But like I said earlier, even tho I haven't watched any of the old video releases this probably looks better than those due to its letterboxed status. There's only one audio track, which fortunately is the English dub (with Chinese subs in the black bar). Now, if this hadn't been so entertaining in a crappy, rough and even gritty way I might have been more annoyed by the fact that the two main actors are dubbed by someone else than themselves but it wasn't a big deal. There a bit of gore and nudity as well (one beheading and our friend Chris visits a bar with nudie dancing). Recommended (and I'm positive Fred of Ninja Dixon is gonna like it!).