From Paris, 1970. I've listened to this four times in a row and I'm gonna listen to it again as soon as I finish this shit. Fucken awesome!!!
Posted by Jack J at 4:50 AM 3 comments:

Lorna the Exorcist on DVD 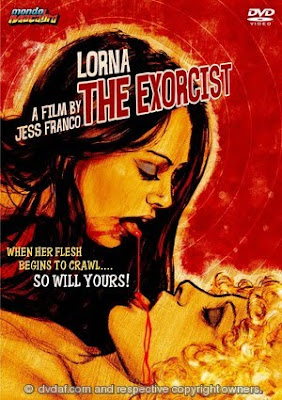 Check this multo cool'o cover for Mondo Macabro's release of Jess/Jesus Franco's LORNA THE EXORCIST. Release date 29th of June. :D
Posted by Jack J at 4:22 AM No comments:

Jezus Christ!! Check out this 17 y.o. metal chick (from the UK) and her guitar playing!!! Pretty awesome (everyone of her vids get like 6 billion comments!). Back in the day I learnt exactly three cords (enough for any good punk band of course!!).
Posted by Jack J at 1:01 AM No comments: