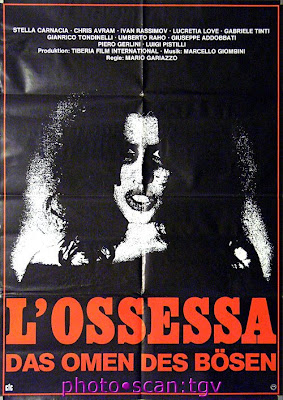 I watched Mario Gariazzo's Italian THE EXORCIST rip-off L'OSSESSA tonight. It was even made the same year (1974) as the original and contained some of the scenes we've become accustomed to by now; the possessed girl writhing on her bed, spewing green goo, and being just generally blasphemous and swearing. I must admit she was a major letdown to the film; I mean instead of Linda Blair we get a twenty year old Italian girl with black hair and a perfect body. She ruined every frame she was in! (picture Homer Simpson, head lump-sided, drooling, and going "arrrrrr"). No, actually the only real letdown was the atrociously bad print from Alpha Video (in the States). Fullscreen, a master so obviously taken from a bad video master, and with colours so faint they looked as thought the print were recorded using a cheap two headed vcr! Anyway, none of that ruins the film which was enjoyable. Not quite in the same league as the film it rips off but pretty cool never the less.
Posted by Jack J at 4:49 AM No comments: