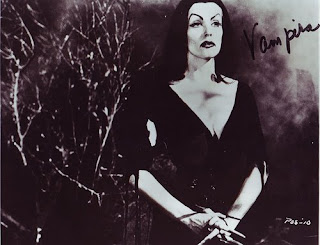 Last night I watched the only surviving episode of the original "Vampira" TV show from 1954!!! It was quite a treat finally getting to watch this show after having read about it for years and years, and after having watched Tim Burton's rendition of it in his (very good) film ED WOOD.

The very first time I saw Vampira (the character) was around 1991 when I went to the cinema and watched PLAN NINE FROM OUTER SPACE in Melbourne. And now, 15+ years later, I finally get to watch her old 1950s TV-show.

The "Vampira" episode was great, dark, cool, horrifying, and everything. In other words; as cool as Tim Burton made it out to be! I thought the DVD would only contain the show itself but actually it also contained the film which Vampira showed on that dark and chilly night: THE MYSTERY OF THE 13TH GUEST (a Monogram horror movie from 1943). I watched the whole thing and the film was all right, not the best horror movie ever, but as I'm saying it was an all right movie. But of course it was nothing compared to the joy of finally getting to watch the "Vampira" show! Even if the whole Vampira thing only lasted five minutes or so!!!

An interesting feature is they kept the original TV ads in the movie and altho I usually hate TV ads I thought this was pretty cool. By the way, I found an on-line listing of all the films Vampira presented on the show and guess what; She did actually show WHITE ZOMBIE as portrayed in ED WOOD! However, in ED WOOD we see WHITE ZOMBIE being shown on Halloween eve which is, eh, let's call it a stroke of artistic freedom on Tim Burton's part, haha. Actually it was shown in May.

The Halloween film (shown the night before Halloween '54) was actually KING OF THE ZOMBIES! Ahhh, Vampira. 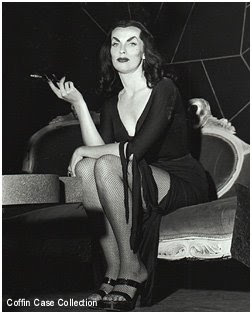 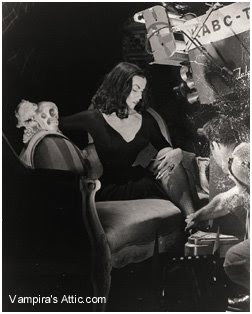 The only DVD release of this sole surviving "Vampira" episode is only available from the official Vampira website. It comes in a plain black (of course!) slip case. They ship everywhere. $10 + postage. The picture quality is great.