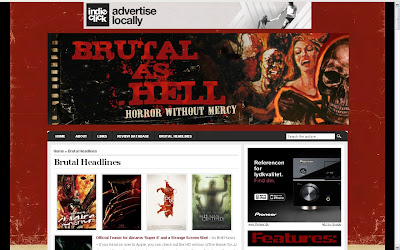 My gawd, how I truly hate and loathe ads on film blogs and web sites!!!

Hate, hate, despise, despise, and loathe to the point of (almost) foaming at the mouth in rabid anger!!! .\_/.

No, I'm not talking about ads that a blog author or web host puts there in order for his readers to be able to locate some of the rare films he just reviewed. No, I'm talking about the motherfucken weight loss ads, the car ads, the bloody mobile phone ads, the what-have-you ads, and not least the shit-for-brains ring-tone ads!!! Have a look at the front of this otherwise pretty cool horror film site BRUTAL AS HELL: The top front logo picture is awesome and I would truly love it if it weren't for the honest to god awful ads (which are probably different depending on your own location as mine has a Danish language camera ad on it).

For fuck's sake! I actually wrote to the guy who owns the site and said something to the effect of Get rid of those ads or I'll kill you and your family and your family's friends and their neighbours - and burn your house down too ... but you know how that goes, so yes the ads are gonna stay. I just don't get it. @_@

By the way, Brutal As Hell is an offspring of the old JOE HORROR horror review site (+ forum) which later became WILDSIDE CINEMA, and then changed its name to HUMAN PORK CHOPS, and now has returned to using WILDSIDE CINEMA site (+ forum). At least Wildside Cinema doesn't have stupid ads so that's great (and the fact that they've got a link to this here blog makes them the better site anyway, haha).
Posted by Jack J at 2:48 PM 10 comments: