News from the Philippines!

Well, the first piece of news is actually not from the Philippines but from America. Well, strictly speaking it's from Andrew Leavold in OZ but it's ABOUT a new exciting American DVD release: THEY CALL HER CLEOPATRA WONG and ONE-ARMED EXECUTIONER are coming out on a spiffy double disc next year!!! Very spiffy indeed!!! Obviously (haha) I have both films already (Cleo Wong on kinda-almost-legit dvd from Global in South Africa, and One-Arm on Greek vhs) but it's gonna be cool with a proper DVD release. Andrew also gave the video company 10 (that's TEN) hours of Bobby Suarez-related interviews to use for extras!! Wonder how much they'll be using!?).

Another piece of VERY exiting news is that the making of VENGEANCE OF CLEOPATRA WONG is getting closer! Yes, astonished 'Pino film fans: Suarez is going to make another sequel to THEY CALL HER CLEOPATRA WONG!! Some of the backing money comes from France and it seems French television is ALSO keen on getting a TV-SERIES made in which Cleo Wong's daughter takes the lead!! My friend, can your heart stand the excitement! I'm absolutely about to burst!!

And, oh, oh, I forgot... VENGEANCE OF CLEO WONG is going to feature not only Cleopatra Wong but ALSO the kid from the two BIONIC BOY films AND the guy from ONE-ARMED EXECUTIONER!!!

Lastly, Andrew himself is also going to the Philippines to make a film entitled THE TALLER THEY COME! LOL. I'm not sure how much of the story and cast is a secret as of yet but lemme just remind you the guy is a big fan of FOR Y'UR HEIGHT ONLY (the TALLER they come, haha). Good luck with all that. 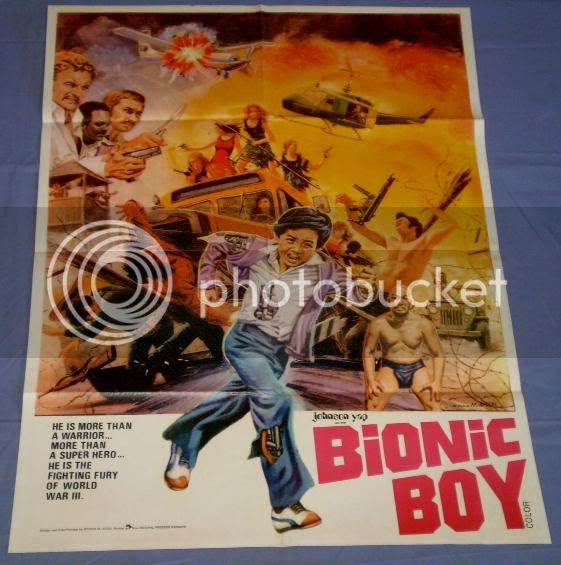 This is the Pakistani poster for the original THE BIONIC BOY film (unfortunately the scan is all I've got. So many posters, so little wall space).
[click the scan to see the full poster]
Posted by Jack J at 3:29 AM 6 comments:

Received the premiere ish of Sweden's new fanzine "Gory-Glory Magazine" today. Exciting! I haven't received a fanzine for the past two years! I remember back in the olden days when there were zines in your letterbox every month. Those days are definitely gone. Usch! Everything was better in the old days; music was something you could actually listen to, not like the infernal racket they pass on as "music" these days. Films were better. Hell, television was better. I miss black & white television. And if your arm broke your dad would just fix it, not like today where you have to go into hospital and shit. I miss the old days.
Posted by Jack J at 3:03 AM 2 comments: