...then the terror is taken to a new level as the rotting cadaver of Raja makes its presence felt in the most traumatizing manner...

Not everything I buy film wise is on old deleted VHS. No, really, I mean it! (haha). Here's two DVDs filled with Bollywood horror movies that I ordered the day before yesterday; First up is Do Gaz Zameen ke Neeche (trans: Two Yards Underground) directed by that crazy Ramsay family. This is their first horror movie, it's from 1972, and actually I've had it for quite some time, however my old version is an un-subtitled video-cd from India. I'm excited about this new DVD as, yes my hairy friends, it does feature English subtitles. Yay. Spiffy! 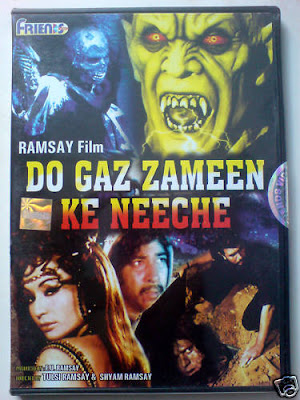 Omar Khan (who directed the Mondo Macabro produced HELL'S GROUND) reviewed the film (my headline is from his review) and amongst other things he said:

This early 70’s effort by the Ramsay family is considered to be a major breakthrough in South Asian horror. Not only did it score a huge Box office bulls eye but it also paved the way for a new wave of horror that veered away from the genteel white sari-clad ghostly figures of yesteryear to the more gory, blood curdling post-Hammer style that was to become the hallmark of local terror in times to come. The Ramsay's had long been ardent fans of the macabre and especially of the films turned out by the Hammer Studio’s in England. It doesn’t take too long watching a Ramsay film to begin to realize just how much of an influence the Hammer style has been on them.

Read his full review here. Being the moron that I am I have never read any of his Bollywood or Lollywood reviews before altho I've known about his and his brother's overly über spiffy site for quite a while. I'm certainly gonna make a change of that! His review is very funny and informative. He's a good writer... and he and his bro owns an ice cream parlor that is all about horror flicks! How cool is that. You can check out their site here. And do read their background story, it's a fascinating read. I wish more people knew about this. 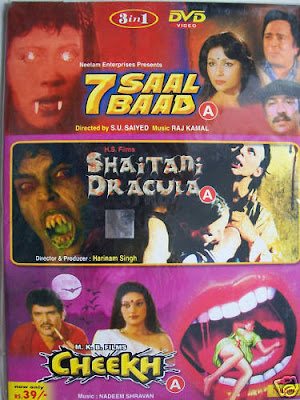