What's up with the HKMDB? o_O

I wonder who the people are who write the Hong Kong Movie Data Base reviews??

Let me try and explain. To cut it down to the bare bones so to speak: The way I see it, there are THREE types of Hong Kong film viewers in this world:

1) Chinese people (and often other Asians) who just don't understand the fascination that fans from the West have with Asian action cinema.
2) Then we have the kung fu film fans that mostly hail the 1970s films as gold, and regard most "new" stuff (everything after 1981) as crappy modern day stuff, haha.
3) And then finally we have fans like me who discovered HK cinema via the modern day films (i.e. the films the kung fu fans often ridicule, lol).

Now, I often look up films on the HKMDB because I have this notion that credits info is probably much better there than on the laughable IMDb (and it mostly is). But mostly I try not to read any of the reviews because... and here is what I don't get... 99% of all reviews there slag off the films!!! O_O

Even the films that are widely recognised as being awesome. Even fan favourites. I don't get it! I do of course realise not everyone agrees with me on every little shitty trash film that I happen to like - but still!

Is it maybe that the HKMDB is made by people from either of the first two categories and the films I usually look up are modern day horror/action/trashy stuff that they just don't like.

One of my favourite "girls with guns" films is ANGEL 2 (aka Iron Angels 2). It's such a joy to watch if you like that kind of films (girls who... shoot guns... kick ass... and look cute) and in the fan press I don't even remember anybody not liking these films just a little bit. But here's what the HKMDB reviewers have to say about ANGEL 2:

"5 minutes of enjoyment, 85 minutes of misery
Almost as bad as the original, but slightly more enjoyable. I think I remember this one being shot on location in Malaysia, which was the only highlight of the movie, the location.
See my reveiw for the original and you will see what I mean when I say this is not much better."

"Basically a pointless collection of action scenes strung together with an incoherent plot concerning terrorists. About 15 minutes worth of entertainment total, not really worth wasting time on."

And this is what it's like with most reviews on HKMDB in regards to newer action and horror movies (after 1980).

Just WHO are these people and why do they watch HK movies when they so obviously don't like them. Personally I would find another hobby.
Posted by Jack J at 7:32 PM No comments: 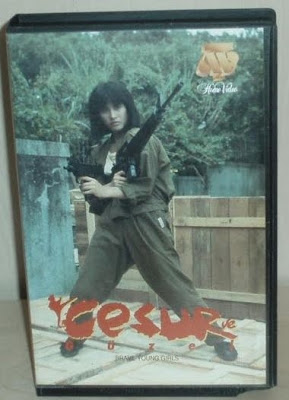 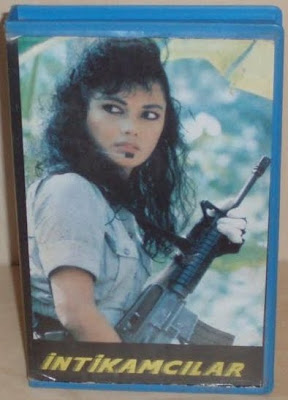 Check out my two new ex-rental tapes! It's the Hong Kong girls with guns flicks BRAVE YOUNG GIRLS and ANGEL 2 (aka Iron Angels 2). I don't have to tell you it's YUKARI OSHIMA on the cover of BRAVE, and Moon Lee, Elaine Lui, and Kharina are in ANGEL 2 (it's Kharina, aka Ha Wan-Loh/Kharina Isa/Karina Andrews, on the cover). Incidentally, Yukari Oshima was the bad guy in the first ANGEL film!
Posted by Jack J at 6:19 PM 16 comments:

Check out this wild and bloody scene from SHARK OPERATION! Thanks to Member-X for uploading it. The clip is from a Danish VHS.


PS: Member-X is selling his tape on eBay. I've already got a copy otherwise I'd scoop it up. xD
Posted by Jack J at 5:10 PM No comments:

Best dino every on a Monday