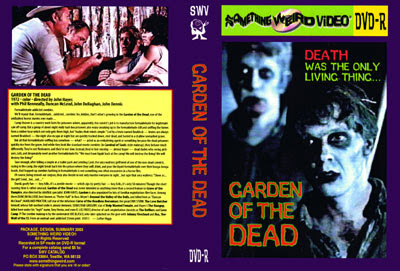 I came home yesterday after my last official day at the newspaper where I (kinda) work. I'd slept exactly one hour the night before and about three hours the night before that so the world was beginning to seem mighty surreal, I put my head on the pillow for two minutes and felt everything spinning and a headache working its way to the upper cortex, "fuck it" I though, I needta CATCH one piecea celluloid before I hit sleepyland. What did I dig out of the dusty archive? Why GARDEN OF THE DEAD naturally!! It's been sitting there unwatched for a couple of years and I figured the thought of ending the day with FORMALDEHYDE ZOMBIES (as the flipside of the cover promises) would be a SPLENDID way to finish the day (where I'd seen one of the editors getting the boot for being "too individual" gee gosh in mah book that's reason FOR HIRING someone!!!), and with a running time of 58 minutes there was even a chance of my actually making it to the end before dozing off. And I did and WOAH... I mean... man, FORMALDEHYDE ZOMBIES!!!

The plot: Inmates from prison camp are gone on smoking FORMALDEHYDE (!!!) and make a run for it only to crash their truck INTO A CEMETERY!! Shoot-outs with pursuing prison guards, lots of dead prisoners, formaldehyde seeps into the ground AT THE CEMETERY and y'all put two and two together and you've got the rest of the plot. Zombies attack the prison camp and they fight it out. Dead people. Zombies. Deteriorating faces. Awesome top of the crop makeup. I wish all films were like this.

The print from Something Weird Video is directly off a fullscreen 35mm print and look just fine. A little ragged at the edges but would you really want it any other way with these kinda trash-flicks!? The director is John Hayes and he also did GRAVE OF THE VAMPIRE which I watched a few years back on VHS. Must rewatch that one soon. GARDEN is definitely recommended! FORMALDEHYDE ZOMBIES!!!
Posted by Jack J at 2:40 AM No comments: