Tonight at Cinema J: HELL UP IN HARLEM 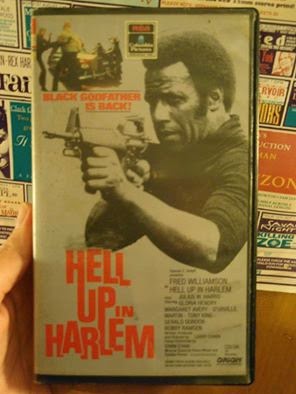 Tonight, I watched HELL UP IN HARLEM. It's the sequel to Larry Cohen's excellent blaxploitation classic BLACK CAESAR from 1973. For some reason I've never watched the sequel before and that's clearly a mistake as it turned out to be pretty entertaining but then again... how could it not be, it stars FRED WILLIAMSON for crying out loud! Of the male blaxploitation main leads Fred was always the one a tad (a lot!) more unpleasant then the rest of the bunch; He always played the hero but there was always something that made him a mean bastard despite being the hero. Richard Roundtree (Shaft) is tough and cool but he's also a flødebolle. HELL UP IN HARLEM isn't as good as BLACK CAESAR but even so it's more entertaining that most stuff today. Anyhoo, up next is dinner and then GET CHRISTIE LOVE!