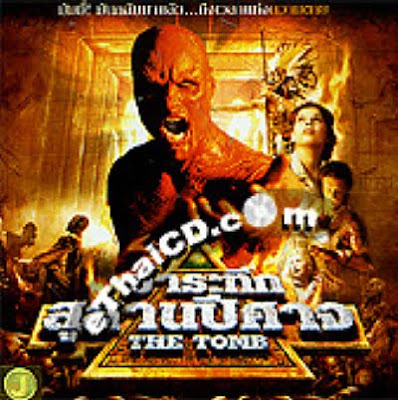 Oh sing thy songs of happiness thee wee ones for today I bring thee words of multo cool info! I've recently discovered there is yet another release of one of Bruno Mattei's last moves! This one is THE TOMB (2004) and it's been released not by our friends in the Česká republika but in Thailand. On video-cd. Dubbed in Thai. Without subtitles. :-(

Boo-hoo!! Why is the world so mean. Oh why oh why (he says while repeatedly spanking himself with a leafless branch). I wrote to Tom, an American in Thailand who runs a DVD store with his wife, Kat, called TK WORLDWIDE. He was nice enough to make a few phone calls and if it wasn't depressing enough that there's only a VCD available then get this: The company had actually planned a DVD as well but they just never got around to putting it out!!! :-(

Tom says there are so many DVD and especially VCD releases EVERY DAY that it's completely impossible to really get a good view of what is actually out there on the Thai market. Well, one thing that isn't out there is a Mattei film called THE TOMB. :/

Having said all of the above I should probably also mention there is actually a reg. 1 release of THE TOMB. It came out several years back and unfortunately I don't have it which is a pain as it seems it's OOP and slightly difficult to find by now.

Thanks to Tom for the effort. TK WORLDWIDE has a lot of cool Thai DVDs and I've bought quite a few films from there. Go here.

PS: Sorry about the crappy cover scan. Usually I spit on pixelating cover scans downloaded from the Internet but it was the only one I could find and besides, it kinda fits the crappy release.
Posted by Jack J at 6:26 PM 6 comments: